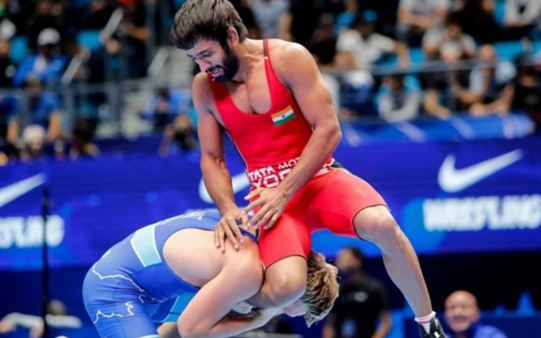 Bajrang Punia and Vinesh Phogat will headline the Indian charge in Rome as the wrestlers tune-up for the Olympics.

Earlier this week, Bajrang Punia announced he would take a sabbatical from social media until the end of the Tokyo Olympics. While the Games might still be a little less than 150 days away, Bajrang’s decision to go offline came the night before he left for Rome for the year’s first ranking tournament that starts on Thursday.

It showed the importance of this tournament in the larger scheme of things, even though by itself, it might not be of much relevance. For every wrestler who has travelled to Rome, the significance of the Matteo Pellicone Tournament varies: for Bajrang, it will be the first official competition in more than one year; for Vinesh Phogat, it will be a chance to build on her remarkable win in Kiev last weekend. And for the young Anshu Malik, it will be a chance to add to her growing reputation.

Of the four wrestlers who have qualified for the Olympics, two – Ravi Kumar and Deepak Punia – have pulled out of the competition. This would have been the first major test for the two wrestlers in the year of the postponed Games. But Ravi said he injured his knee during the national camp in Sonepat last month while Deepak, who recovered from Covid19 earlier this year, was down with a fever. That puts the spotlight on two of India’s biggest medal hopes the Olympics – Vinesh and Bajrang.

Vinesh marked her return to competition after a year-long gap with a jaw-dropping performance at the Kiev International last weekend. Despite being away from the mat for so long, the 26-year-old showed few signs of rustiness in the 53kg weight class final when she pinned 2017 World Champion Vanesa Kaladzinskaya in remarkable fashion.

In the absence of wrestlers from women’s wrestling powerhouse Japan as well as China, Vinesh will be challenged by Ecuador’s Luisa Melendres and Cuba’s Lianna Herrera. New national champion in the 53kg category, 23-year-old Nandini Salokhe too is set to make her international debut in this tournament.

Bajrang meanwhile will compete for the first time since the Asian Championship in February last year. Even though he was away from competition, Bajrang spent a couple of months in the United States to train, where he also competed – and won –an eight-man invitational tournament.

Rome, where Bajrang is the defending champion, would post a completely different challenge. His nemesis Takuto Otoguro of Japan won’t be present at the event, but the world number 2 will still face tough competition from Kazakhstan’s Daulet Niyazbekov and Benham Ehsanpoor, a champion 61kg wrestler from Iran who bumped up his weight category to 65 kg recently. Bajrang, however, will be a favourite to retain his title.

An opportunity for Sakshi, Anshu

Sakshi Malik, who has struggled to match the levels that helped her win the bronze medal at the 2016 Olympics, will have another opportunity to sort out her form before the Asian Olympic qualifiers next month. The 28-year-old has been overtaken by youngster Sonam Malik as India’s best bet in the 62kg weight category.

But Sonam, who suffered a freak injury while sparring with Sakshi at the national camp, has pulled out of the tournament. The spotlight in this category, from India’s point of view, will solely be on Sakshi. And if she manages to eke out a podium finish here, it’ll act as a great confidence booster ahead of the selection trials for the Asian Olympic qualifiers, which are likely to be held later this month.

Rome will also be an opportunity for Anshu Malik (57kg category) to add to the buzz around her, which coincidentally began after she won a silver medal in this tournament last year. Since then, the 19-year-old has medalled at the Asian Championships (bronze), the individual World Cup in Belgrade last December (silver) and was crowned the national champion in January.

In the absence of the top-ranked wrestler in this category, Japan’s Risako Kawai, Anshu will be up against Nigeria’s Odunayo Adekuoroye and Giullia de Oliveira of Brazil, both ranked inside the top five.

Few weight categories have as much depth as the men’s 74kg – although it can be debated if the Indian grapplers in this class can match foreign standards. In Rome, the 74kg category will boast of 13 wrestlers who have six world titles, an Olympic gold and bronze, and 20 total world medals between them.

This is also a crowded weight category in India, with close to six wrestlers in the fray for one Olympic berth. India had entered three grapplers for this competition – Jitender, Narsingh Yadav and national champion Sandeep Singh – but Jitender pulled out citing an injury. For Narsingh, this will be the first international major competition since returning from his doping ban, while Sandeep will make his international debut.

But in a weight class that has some of the best wrestlers in the world, a potential bout between American Jordan Burroughs and Italy’s Frank Chamizo could be the show-stopper. Burroughs’ offensive style has often been countered remarkably by Chamizo’s strong defence, and Rome could see another chapter unfold in what is regarded as one of the greatest rivalries of the last decade.