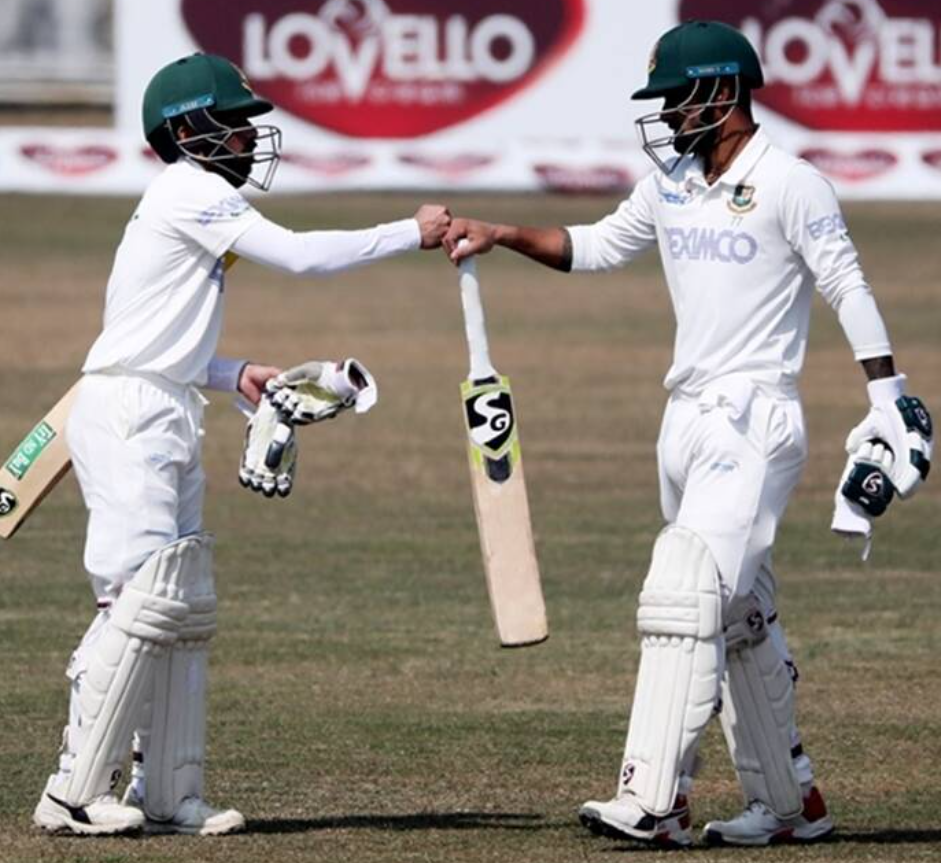 Captain Mominul Haque hit his 10th test century and off-spinner Mehidy Hasan continued his good form for Bangladesh on the fourth day of the first test against West Indies on Saturday.

At the end of the day, the visitors reached 110-3, with two debutants Kyle Mayers (37) and Nkrumah Bonner (15) batting. Mehidy Hasan (3-52) took all the three fallen wickets.

Resuming the day on 47-3, Bangladesh declared its second innings on 223-8 with Liton Das playing an important role alongside the captain.

Das struck 69 and shared 133 for the fifth wicket stand with Mominul to keep the visitors frustrated.

West Indies got a glimmer of hope when off-spinner Rahkeem Cornwall struck early, dismissing Mushfiqur Rahim for 18. Mushfiqur reviewed the decision in vain.

With the ball keeping low, Mominul and Liton had to be watchful.

Mominul completed his 10th century off 173 balls, pushing the ball toward cover for a quick single.

This made him the highest centurion for Bangladesh, eclipsing opener Tamim Iqbal’s nine tons. The century is also his seventh in Chattogram venue.

Both Mominul and Das fell in the space of five balls in a bid to accelerate the scoreboard.

Shortly after that, Bangladesh declared it innings to give them enough time for ensuring the victory.

Chasing the target of 395, West Indies openers — captain Kraigg Brathwaite (20) and John Campbell (23) — made a sedate start, before both of them threw it away.

Off-spinner Mehidy Hasan, who scored a century in Bangladesh’s first innings, got both of them in consecutive overs.

Mehidy then claimed the wicket of Shayne Moseley for 12 to leave West Indies 59-3.

With Bangladesh looking to close in on victory, Bonner and Mayers resisted by sharing 51-run in an unbroken fourth wicket stand.