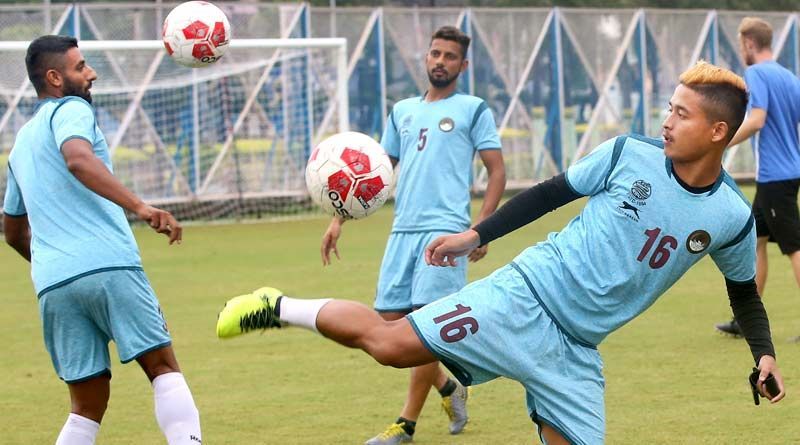 Mohun Bagan will cross paths with Aryan FC in their Calcutta Football League fixture on Thursday afternoon at the Kalyani Stadium. The defending champions have been in sublime form since the Kolkata Derby earlier this month. On the other hand, Aryan FC is struggling to stay out of the relegation zone at the moment.

After the humiliating 0-3 loss to Peerless in the opening match of the league, Mohun Bagan have improved immensely under the tutelage of Kibu Vicuna. Mohun Bagan displayed a dominating performance in the previous match against George Telegraph winning the encounter by a 4-0 margin.

They are slowly getting into the groove of the tiki-taka style of football. Youngsters like Nongdamba Naorem, Sheikh Sahil and Lalramchullova are punching above their weight and playing on an equal footing with the foreigners. The coach has managed to establish rhythm, which is paying off dividends on a large scale as the season is progressing.

Going by the trend, it is expected that Kibu Vicuna will make a few changes in the starting line-up for the upcoming match. Central defender Fran Morante might get a start ahead of Fran Gonzalez. Nongdamba Naorem, who played his best match in Bagan colours last weekend will play in his regular position. Suhair VP, who scored the opening goal in the last match, will start alongside Salva Chamorro in the forward line.

Joseba Beitia played a pivotal role in Bagan’s win over George Telegraph, and has been the most consistent performer for the team till now. Sheikh Sahil is going to be the partner in crime for the Spaniard in the midfield.

The Rajdeep Nandy coached side is having a tough time in the ongoing league, they are loitering at the eighth position in the league table with just a single win from 6 matches. It has been a month since Aryan FC won their last match. On the positive side, they have experienced players like Ademola Kuti and Chika Wali in the squad. Aryan FC needs to bring out their best game to pose any sort of threat to a well organised Mohun Bagan team.

The Mizo is arguably one of Bagan’s best Indian recruits this season. The former I-League winner has had a great spell with East Bengal last season. It is not easy to cope up with the pressure when you shift your loyalties to the neighbouring club, but the side-back overcame it with flying colours.

The energetic footballer had a great outing against his former club in the Kolkata Derby, and gave two assists in the previous game. He is fast, agile and full of steam, Lalramchullova is proving to be one of the most important players in the Bagan setup.

The Nigerian is probably the most experienced foreigners in the Indian football circuit right now. He was roped in by former I-League club Pune FC from his native River State back in 2008. Since then, the stopper has played for various clubs like United SC, Salgaoncar, Dempo and Ozone FC.

He is now a vital member of Aryan FC along with compatriots Ejiogu Emmanuel and Ademola Kuti. The central defender will have a huge role to play on Thursday’s game, with the likes of Salva Chamorro on the opposite side. Apart from that, he has to cut down the free-flowing play of Bagans’ speedy wingers.

Mohun Bagan is a far better side than Aryan FC. An easy win is expected from their point of view