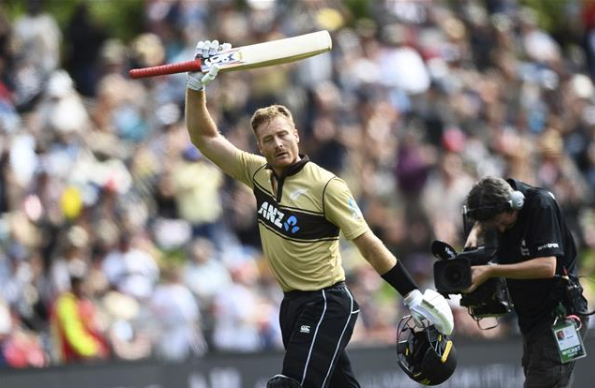 Josh Philippe tried to set the foundation on which a successful chase could be built, making 45 from 32 balls

Martin Guptill made a spectacular return to form, hitting eight sixes in a 50-ball innings of 97 which lifted New Zealand to a thrilling win over Australia by four runs in the second Twenty20 cricket international.

Guptill led New Zealand to 219-7 as it batted first after losing the toss Thursday and Australia seemed out of the match when it slumped to 113-6 after 13 overs.

But Marcus Stoinis made 78 from 37 balls and shared a partnership of 92 in 6.1 overs with Daniel Sams, who scored 41 from 15 balls, to get Australia within a shot of an incredible victory.

Australia went into the last over in a strong position, needing 15 runs with four wickets in hand.

New Zealand turned to Jimmy Neesham, who hadn’t bowled in the match, and it proved an inspired decision; he removed Sams with the first ball of the over, tipping the match in New Zealand’s favor.

Stoinis couldn’t score from the next two balls but clubbed a six from the fourth ball of the over, leaving Australia needing nine runs from two deliveries. Hitting out, Stoinis skied a ball high into the leg side and Tim Southee, with icy nerves, stood under the ball and claimed the catch which sealed the win and gave New Zealand a 2-0 lead in the five-match series.

“We got back into a great position,” Australia captain Aaron Finch said.

“That partnership between Stoinis and Daniel Sams produced some extraordinary hitting, like the first innings as well.

“It was a great game of cricket, good to be a part of, unfortunately we didn’t come out on the right side.”

Guptill, 34 and New Zealand’s most-prolific T20 batsman, had been under pressure to hold his spot in a strong Black Caps lineup as he endured a long form slump and new players emerged from domestic cricket to challenge him for his opening role.

On Thursday he provided a sharp reminder of his proficiency in the short format and set the tone for New Zealand’s innings, exploiting the short boundaries at the University Oval which was hosting a T20 international for the first time.

In total New Zealand’s batsmen hit 18 sixes, a record for a T20 international, and Guptill overtook India’s Rohit Sharma (127) to top the list for most sixes by a batsman in T20 internationals with 132.

Kane Williamson hit three sixes in his 53 which came in a 131-run second wicket partnership with Guptill. Neesham hit sixes from the first two balls he faced and four in his first five scoring shots. He finished 45 not out, hitting his last six from the final ball of the innings.

“My job doesn’t change throughout the summer,” Guptill said.

“I just went out to do as well as I could and fortunately it came off today.

“Kane’s a genius at batting and to have him alongside me in a hundred partnership was fantastic and set up the innings.”

Australia made a strong beginning which saw it reach 50-1 after five overs, where New Zealand had been 30-1, but the Australian innings briefly meandered and lost its way, mainly against the New Zealand spinner Mitchell Santner.

Josh Philippe tried to set the foundation on which a successful chase could be built, making 45 from 32 balls. But he had little support from the Australian top order; Finch made only 12, continuing his poor form from the Big Bash League, and Matthew Wade made 24.

Phillippe fell at 112-4, the first of three wickets from four balls for Santner, who also dismissed Ashton Agar and Mitch Marsh for first ball ducks and left Australia 113-6.

Stoinis led Australia’s extraordinary rally, reaching his half century from only 22 balls. He hit seven fours and five of the 13 sixes the Australian innings contained.

Sams was the perfect partner, striking the ball cleanly and hitting two fours and four sixes before falling to a knee high full toss in the final over.