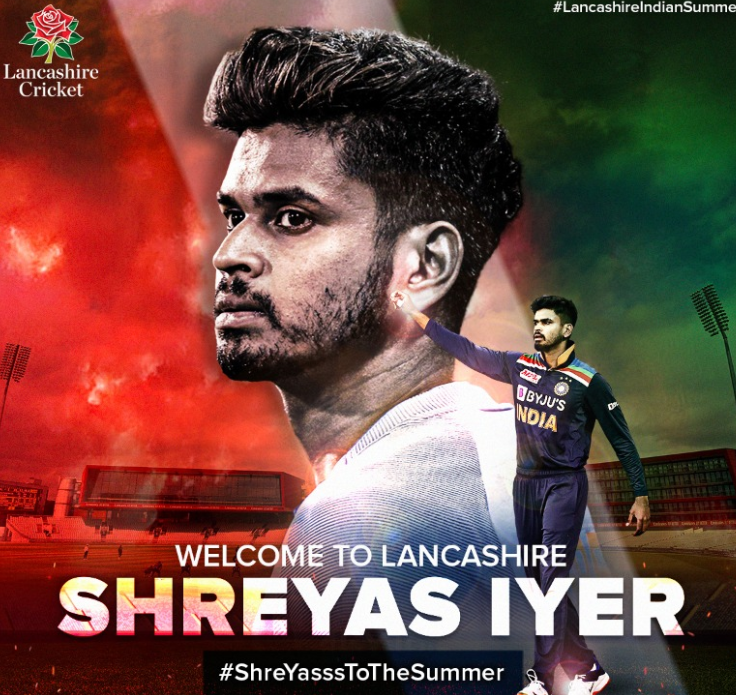 Shreyas Iyer becomes the sixth Indian international cricketer – after Farokh Engineer, Murali Kartik, Dinesh Mongia, V.V.S. Laxman and Sourav Ganguly – to have signed for Lancashire for the 50-over tournament.

English county side Lancashire have signed Indian batsman Shreyas Iyer for the duration of the 2021 Royal London Cup, the domestic 50-over tournament in the country.

Iyer will arrive at Emirates Old Trafford on Thursday 15 July will remain with the Red Rose for the duration of the month-long group stage, according to a Lancashire press release.Farokh Engineer had been the first Indian to play for Lancashire in 1968. Four other Indian Internationals – Murali Kartik, Dinesh Mongia, V.V.S. Laxman and Sourav Ganguly – have also represented Lancashire in the 50-over tournament.

Speaking after agreeing to join Lancashire for the 2021 Royal London Cup, Shreyas Iyer said: “Lancashire is a legendary name in English Cricket with a long-standing association with Indian Cricket. I am extremely humbled and honoured to carry the legacy forward of greats like Farokh Engineer, Sourav Ganguly and VVS Laxman at Lancashire.

“Emirates Old Trafford is a world class international stadium and I am looking forward to meeting my teammates and the supporters of the Club.”

Lancashire’s Director of Cricket, Paul Allott, added: “Shreyas is one of the shining lights of a new generation of Indian batsman and a leader, and we’re delighted that an opportunity to bring him to Emirates Old Trafford has presented itself.

“With the expectation that we will be fielding a younger side in this year’s Royal London Cup due to the Hundred, it was important that we brought in a top-order batsman with experience at the highest level to enhance our prospects in the tournament.

Lancashire will kick off their Royal London Cup campaign at home to Sussex on Friday 23 July, with a friendly fixture against Cumberland CCC on Tuesday 20 July.