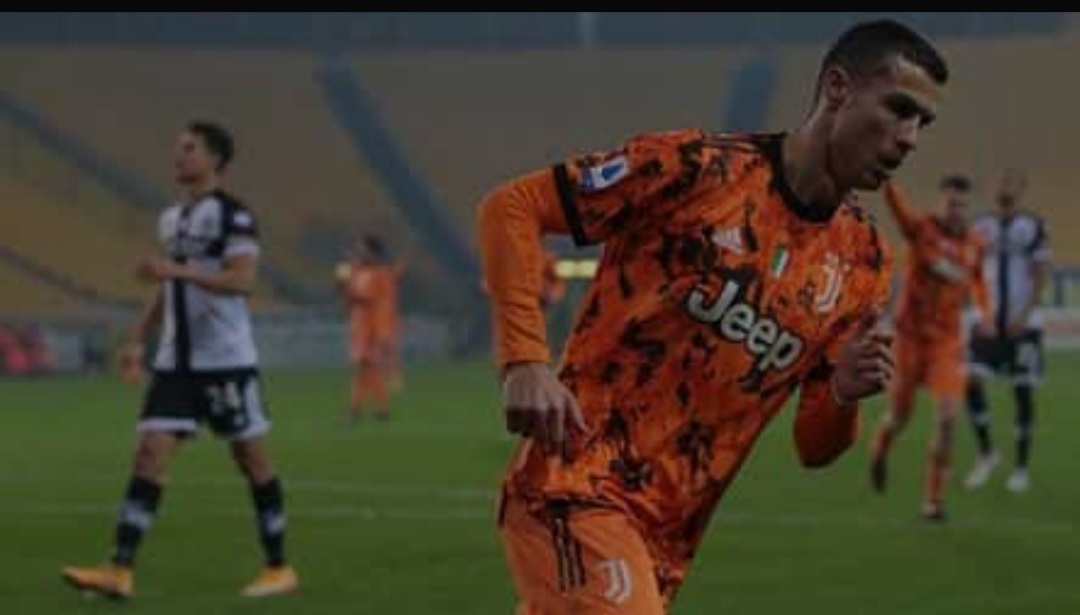 Cristiano Ronaldo scored a double as juventus  thrashed Parma 4-0 on Saturday to move within a point of series A leaders ac milan  The Turin giants, chasing a 10th straight league title this season, remain unbeaten after 13 matches this term. Ronaldo, who missed a penalty in the midweek 1-1 draw with Atalanta, made amends with his third brace in four games. “Ronaldo was quite rightly angry with himself after missing a penalty,” Juve coach Andrea Pirlo told DAZN. “But fortunately he didn’t have much time to stew over it and immediately got the chance to show just how much he loves to score goals.”

who welcome Spezia to the San Siro on Sunday, when AC Milan also visit Sassuolo.

“We’re slowly getting to what we all want, not just me, but also the players,” added Pirlo, whose side drew five of their first nine league games of the season.

Ronaldo started up front alongside Alvaro Morata in Parma, with Paulo Dybala not even on the bench after suffering a muscle injury.

Juve made a slow start to the match, needing 42-year-old goalkeeper Gianluigi Buffon to make an excellent save to prevent Juraj Kucka giving Parma the lead.

Buffon was playing against his former club, where he won the 1999 Coppa Italia and UEFA Cup titles.

“Whenever I come to Parma, there’s no denying it, I always have this nostalgia within me,” said Buffon, who turns 43 next month.

“I spent 10 unforgettable years of my life here and the people of Parma will always mean so much to me.”

Instead, the visitors forged ahead midway through the first half as Dejan Kulusevski side-footed home after good work from Alex Sandro.

The game was all but over three minutes later, as Morata crossed for Ronaldo to power an emphatic header past home goalkeeper Luigi Sepe and into the bottom corner.

Parma were fortunate not to fall further behind before half-time, with Ronaldo curling narrowly off target and Leonardo Bonucci bundling wide from close range.

The 35-year-old Ronaldo made completely sure of the three points shortly after the restart, collecting Aaron Ramsey’s pass and drilling the ball into the net left-footed.

Pirlo’s men needed Buffon to make another good save from Kucka to preserve their clean sheet, before Juventus centre-back Matthijs de Ligt had a goal ruled out at the other end.

Morata got the goal his all-round display deserved in the 85th minute, nodding in his 10th of the campaign in all competitions.

Listen to the latest songs, only on JioSaavn.com

On Sunday, Atalanta will host Roma without playmaker and captain Papu Gomez, after talk of a possible January exit for the Argentinian intensified on Saturday.

The Bergamo club released a statement saying Gomez would not feature against Roma due to a “technical choice”.