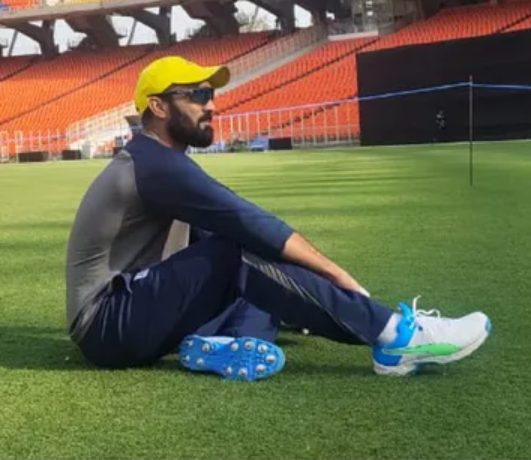 Tamil Nadu skipper Dinesh Karthik praised the Gujarat Cricket Association and BCCI as he shared pictures from the world’s largest stadium – Motera ahead of the knockout stages of the Syed Mushtaq Ali Trophy.

Tamil Nadu captain and veteran wicket-keeper batsman Dinesh Karthik was all praise for the Gujarat Cricket Association and the Board of Control for Cricket in India (BCCI) as he shared pictures from the world’s largest Stadium – Motera Cricket Stadium in Ahmedabad. The newly-renovated stadium will be staging the knockout stage matches of the ongoing Syed Mushtaq Ali Trophy 2021.

The quarter-finals of the Syed Mushtaq Ali Trophy 2021 will get underway from Tuesday (January 26) followed by the semifinals. The final will be played at the Motera Stadium on December 31. All the knockout stage matches will be played at the same venue which has not yet hosted an international or domestic tournament.

Sharing pictures of himself from the stadium ahead of Tamil Nadu’s clash with Himachal Pradesh in the second quarter-final of the Syed Mushtaq Ali Trophy 2021 at the Motera Stadium, Karthik said he hopes the world’s largest stadium soon hosts Indian Premier League (IPL) matches.

The stadium also houses a variety of tracks for the bowlers to train on and sharpen their skills. The Motera Stadium is likely to host IPL matches this year if the tournament is not moved out of India.

Meanwhile, Karthik, who led Tamil Nadu to five wins in five games in the group stages will hope to inspire his side to the final of the  Syed Mushtaq Ali Trophy 2021.