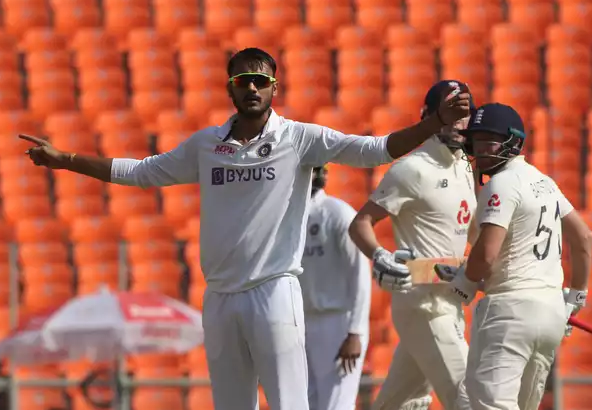 We’re in the first hour of play in Ahmedabad and Mohammed Siraj’s pitch map to Joe Root is already banishing any murmurs of his elevation into the XI over India’s home expert, Umesh Yadav. India have lost the toss but England’s Axar-shaped scars from the two previous Tests have meant the captain is dragged out to the middle rather quickly. The opposition’s best batsman is out to salvage the situation, hopefully, the series, on a fairly benign surface, which if anything has good bounce and carry.

Siraj bowls seven balls to the England captain on either side of the first drinks break; not one of them short enough to cut or full enough to drive and all bar one clustered between the 8.5 and 6.5-metre mark. The first five balls curve away from a slightly wider line because Root is good on the drive, even away from his body. The England captain is frustrated. He admonishes himself after an awkward poke and miss. There is still no length for him to drive and with every delivery, he is forced into moving across his stumps to try to get close to the ball. The sixth is banged in short and Root manages to get under and tickles a pull for four. Things are heating up, literally and metaphorically.

The players take drinks and Siraj returns with replenished electrolytes with endgame on his mind. Now to do what he does best, what even his senior pace partner Ishant Sharma is striving unsuccessfully to do so. Siraj may have just returned from Australia where the operating length was slightly shorter, but muscle memory of bowling on these wickets doesn’t take long to kick in. His first ball is delivered at 140 kph on a six-and-a-half metre length, on the fourth stump, swings in and nips back to beat Root’s flick and traps him plumb in front.

“Mazaa aa gaya (it felt great),” he exclaims at the end of the day. “I was just thinking I have to set him up. When it was swinging away, I felt good that it was going out and out [further and further away]. Then the first ball of the fresh over, I had decided I’ll bring it back in and pitch it up.”

In his still fledgeling career, Siraj has shown that his craft is not easily overshadowed by bigger events. It has won over personal loss, financial hardship, racial profiling and even offensive internet memes. It definitely wouldn’t be trapped under the overarching Axar-Ashwin umbrella that has enveloped this series.

Fast bowlers like stacking their slip cordons and love seeing the ball go there on the first morning of a Test match. Siraj is no different. His ability to move the red ball got Virat Kohli to give him a third slip, a luxury that hadn’t been accorded to Ishant. But you suspect bowlers like Siraj love it as much when they get top batsmen beaten on the inside edge. Of his 73 Ranji Trophy wickets, 40 (54.7%) are either bowled or LBW. It is not at large odds with his overall first-class numbers – 75 out of 166. Do the numbers remind you of someone? 58% (36 out of 62) of Mohammed Shami’s Test wickets in India are through these two modes.

It is not that Siraj, or even Shami, gets these bowleds and LBWs just by bowling full. His stock length is fuller than that of Ishant’s but a little shorter than Umesh, whose staple ball is the outswinger. The batsmen, like Root and Jonny Bairstow later in the day, are dismissed when they are rooted to the crease, unable to move either forward or back. Then there is the skiddy nature of Siraj’s deliveries that keep batsmen from confidently pressing forward even on subcontinent surfaces. That he can swing the ball both ways, nip it around, bowl at a high of 146.7 kilometers per hour or turn into a metronome and hit one spot relentlessly through a spell offer compelling reasons for his rapid elevation.

Of course, five Tests is a short sample for any bigger deconstruction and Siraj is hardly a finished article. But he has already shown a tremendous grasp of his craft since being thrown into the cauldron in Australia and has possibly grown with every game and each spell. Even when he hasn’t been a starter, like in the series opener here despite it coming on the back of a Gabba five-fer, he has sat by the sidelines observing James Anderson bowl or with the analyst picking out the chink in Bairstow’s setup to the incoming ball.

It didn’t matter that the pitch on the opening day of the final Test was more conducive to batting than it has been on the last six days of this series or that England treaded the predicted path with metronomic foreboding. On a day in which eight wickets fell to spin, Siraj was the kink that triggered the all-familiar procession