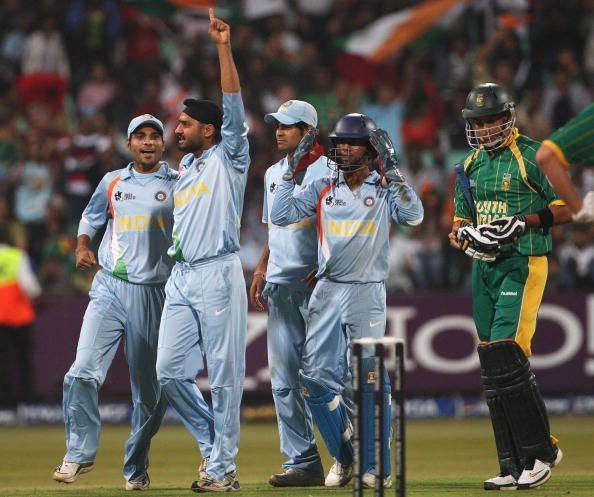 In 2006, India became part of a cricketing concept that promised more entertainment and action than flamboyance. India adopted an unknown entity that was considerably alien to the home fans, the largest consumers of cricket in the world – T20 cricket.

On December 1 2006, India stepped into the Wanderers stadium in Johannesburg with spectators glued to see a different brand of cricket on display. Hardly were they aware that 13 years down the line, that very concept would change the way cricket was played. Under the captaincy of then swashbuckling opener Virender Sehwag and banking on the experiences of Sachin, Mongia and Zaheer, a confident India took on South Africa.

Roughly eight months later, India were playing their first match in the inaugural ICC T20 World Cup in South Africa itself. Australia were far ahead on paper than the rest, Pakistan excelled in their department of unpredictability, while South Africa were the home favourites.

But where did India stand?

With only one T20 match under their belt, India were young, hungry but largely untested. No one expected a great deal from a team that was perennially dependent on Sachin Tendulkar and Sourav Ganguly, with a young MS Dhoni at the helm. India defeated arch-rivals Pakistan to win the first ICC T20 event. The complexities of the game went deeper, players became fitter, even cricket boards started having different captains for different formats. But somewhere down the line, India took a huge leap into the future.

MS Dhoni’s decision to play a young and a fitter side (after the 2007 ICC Cricket World Cup debacle) proved decisive as it carried its weight through different editions of the IPL, international T20s and even the longer versions of the game. In comparison, the T20 side that defeated South Africa in the inaugural event in 2007 (South Africa were eliminated by India in the super eights) doesn’t differ much to the current T20 side. The fitness factor being one. A so-called ‘Yo-Yo’ test ranks highly in skipper Virat Kohli’s decision to field a playing XI, while Dhoni went with a side that was versatile – very similar to total football (each player has the ability to play at any given position). A young team gave an option of saving that extra single, singles being converted into two’s and half chances to wickets.

Dinesh Karthik’s diving catch in the slips to remove Graeme Smith; Rohit Sharma’s arrival at the international scene with a terrific half-century and an even better run-out of Justin Kemp, inter-changing of keeping gloves between Dhoni and Karthik; these incidents simply described what the format was all about. You had to be innovative and fast.

Confidence and the belief did wonders to a new-comer. Whether it was Rohit Sharma in 2007 or a Rishabh Pant in 2019, captains played a huge role. The excitement in Ravi Shastri’s voice while describing Karthik’s catch was palpable and even though Virat Kohli wasn’t around then, he would have definitely watched it along with his Delhi teammates.

A T20 match against South Africa brought out the best in India- tactically and physically, the team against whom it all started. Soon we would complete 12 years of India’s historic T20 World Cup triumph, and if Virat Kohli’s men are to be trusted with 14 months into the future, we may be seeing an additional star stitched on the blue shirt.