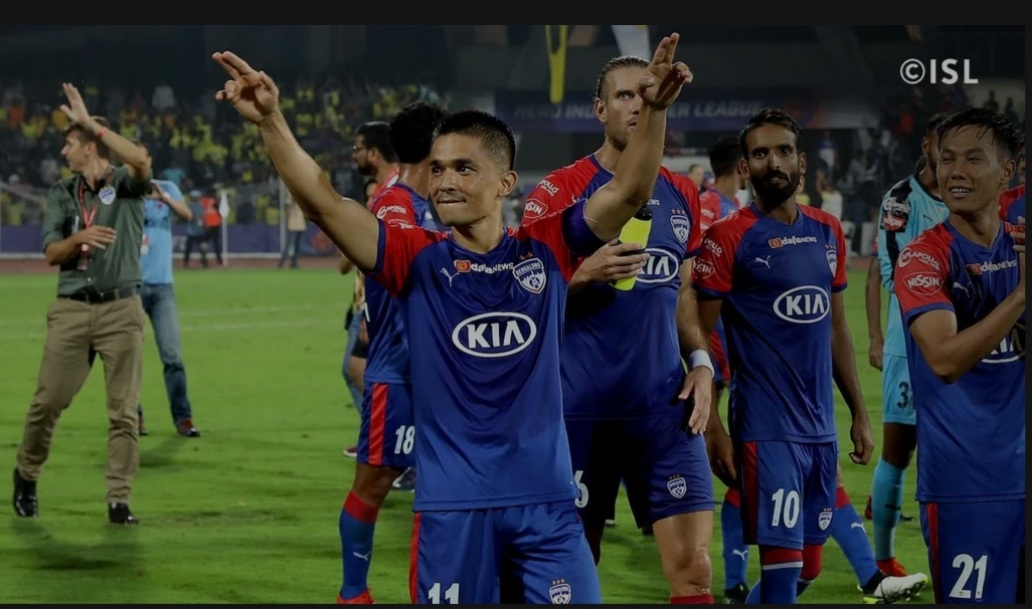 Indian Super League {ISL} Bengaluru FC boasts one of the strongest fan bases all over India. This year due to Covid 19

estrictions just like every other team the Blues are forced to play inside a Bio-bubble in Goa and without fans. Otherwise, their vociferous fans used to follow them everywhere across the country.

To maintain their strong bond with the fans, 2018-19 ISL winners have signed up with celebrity engagement platform myFanPark which allows the fans get up close and personal with their favourite stars from Bengaluru Football Club, including legendary skipper Sunil Chhetri, Spaniard Juanan Gonzalez and India’s No.1 ‘keeper Gurpeet Singh sandhu Fans will be able to get personalised experiences including shout-outs and signed merchandise from Bengaluru FC players from December 22 to December 28.

“We haven’t been playing in front of our fans, but that only wants us to do more to strengthen our connect with them. Through myFanPark, fans have the unique opportunity to stay in touch in a special way with their stars at the club,” said Mandar Tamhane, CEO, JSW Bengaluru FC

While the fans have been missing out on all the action at the stadiums, even the players have been vocal about missing the atmosphere the fans create. “This has been a difficult year for all of us – both players and fans alike. It’s nice to see everyone looking to go above and beyond to bridge that gap through different platforms, and this is one of them,” said Chhetri. Speaking on Bengaluru FC’s presence on the platform, Juanan – the club’s Spanish defender – said, “We are always trying our best to stay connected with the fans and what myFanPark offers is a novel way to do that. Let’s hope we can make December happier for everyone through the platform.”

The experience is an effort to get fans closer to the game and their heroes amid what is very difficult times for sport. “It is our endeavour to bring football fans closer to their icons in more ways than one, so this December will be a special one,” said Shailendra Singh, the serial entrepreneur who brought the South African start-up myFanPark to India.

It has been a stop-start season for the Carles Cuadrat coached side. They currently sit on the third position with 12 points after seven games (three wins, one loss and three draws). They lost their last game against ATK Mohun Began by a solitary goal.

Bengaluru FC play Owen Coyle’s Jamshedpur FC next on Monday, December 28 in match number 41 of the Indian Super League season 7 at the Fatorda Stadium in Goa.