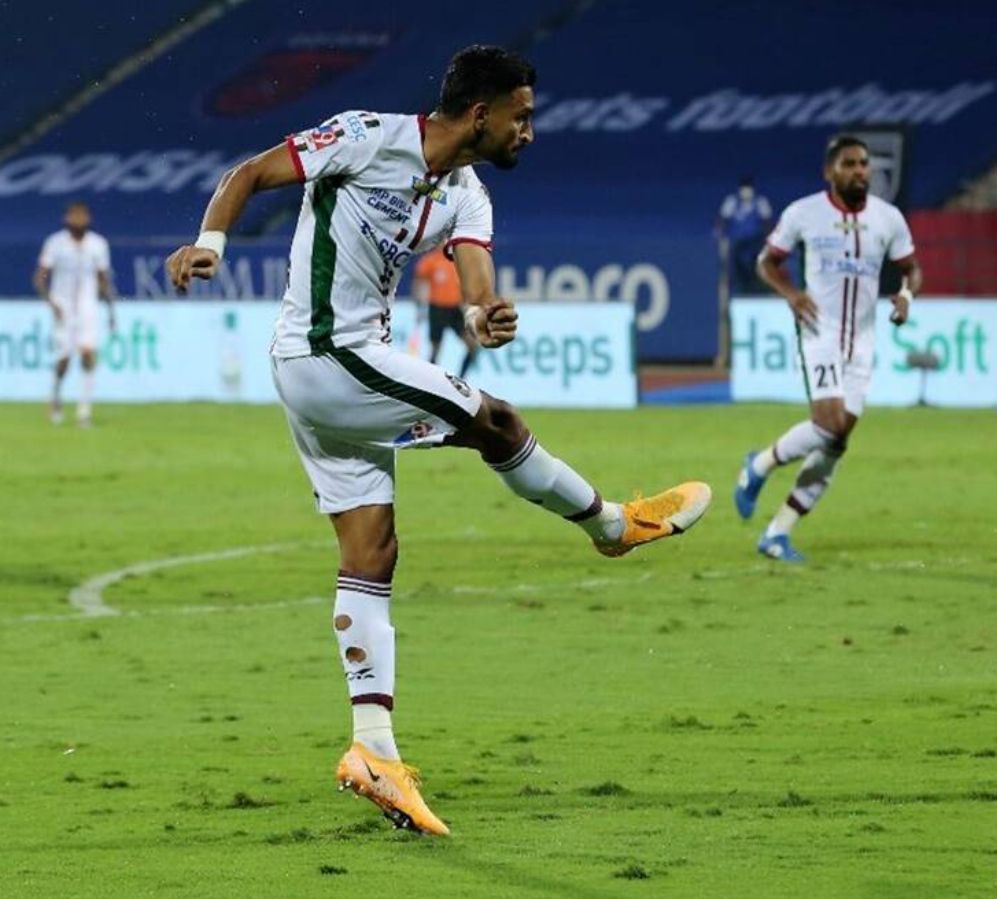 For long, the Indian national team has searched for a pure striker and at the moment, Manvir Singh might seem like the best bet to fill the spot.

An ever so slight foot off the pedal from Mumbai City FC in the past few weeks has seen ATK Mohun Bagan attempt to claw the distance between the two with there being only a three-point margin between the two teams at the end of the Indian Super League’s Round 17.

Bagan squared up against Odisha FC in this round. Odisha, whipping boys of the league this season and fresh off rightfully striking their coach off their books, gave up four goals and two of those goals came at the hands of Roy Krishna.

After a brief lull in the middle of the season, Krishna has started to once again come into the thick of the action, in the very sense of the phrase. The striker was making plenty of runs and using his pace against an Odisha team that was constantly forced to retreat to counter his threat. Krishna’s energetic, non-stop action in the final third was the catalyst for an ATK Mohun Bagan team that was missing this energy at the start of the season, despite sitting pretty at a playoff spot.

It had a direct impact on Manvir Singh. For long, the Indian national team has searched for a pure striker and at the moment, Manvir might seem like the best bet to fill the spot. Playing from the right flank, he scored twice for ATK. The first goal, a routine cutback to his weaker foot combined with a jaw-dropping curler into the goalkeeper’s far post, using said weaker foot, set the tone for a match that saw multiple long-range attempts from both teams. Manvir, would score another goal for ATK, this time a right-footed drive into the keeper’s near post, who ended up making a meal out of a routine stop. Four goals in 15 games isn’t the return one would want from their premier striker, but considering his position on the field during the ISL, it might not be the worst idea in the world for Indian national team boss Igor Stimac to look at Manvir as his first option at No 9

.Play of the week
The long-range arms race that was the Bagan-Odisha match saw the bottom-placed team score just a solitary goal. But in a match that saw some high-quality individual goals, the Odisha goal was likely their only bright spot in an already complicated past couple of weeks. Paul Ramfangzauva, deep in the midfield took a pop at goal from miles away and somehow managed to hit the post. The ball careened off the post and a poor clearing attempt by ATK’s backline meant that Odisha, within seconds, had the ball back. And Cole Alexander took his shot at goal from outside the box and curled Odisha’s only goal of the game into the goal.

The foreign hand
The arrival of Bright Enobakhare hasn’t had the impact East Bengal wanted post the January transfer window. An initial wondergoal aside, his impact hasn’t really seeped through the team and East Bengal are left to rely on Adam Pilkington to somehow pull them through to the finish line. The Englishman scored the opening goal in EB’s 2-1 win over Jamshedpur FC. The second was scored by Ville Steinmann, who scored his fourth goal in 14 games and helped EB get a rare win in a season that has been plagued with a top striker as their coach unable to get his team to score goals freely.