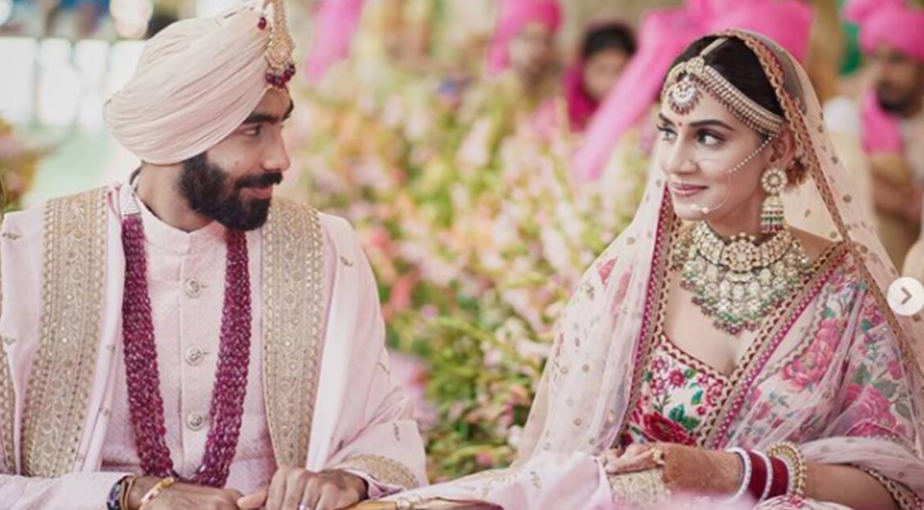 Jasprit Bumrah tied the knot with sports presenter Sanjana Ganesan in a private ceremony in Goa on Monday, beginning their ‘new journey together.’

India pacer Jasprit Bumrah tied the knot with sports presenter Sanjana Ganesan in a private ceremony in Goa on Monday, beginning their ‘new journey together.’

Bumrah and Sanjana got married in a private ceremony attended by close friends and family members. Bumrah, 27, shared the news on Instagram with the caption, “Love, if it finds you worthy, directs your course. Steered by love, we have begun a new journey together. Today is one of the happiest days of our lives and we feel blessed to be able to share the news of our wedding and our joy with you. Jasprit & Sanjana.”

Bumrah had requested the Board of Control for Cricket in India (BCCI) to be released from the fourth and final Test against England for personal reasons. Ever since, speculation over his marriage started doing the rounds on social media. The Indian pacer was not added to the T20I squad for the England series and is unlikely to be part of the ODI series as well.

He will, however, be back in action for the upcoming Indian Premier League 2021 where defending champions Mumbai Indians will be taking on Royal Challengers Bangalore in the season opener at the MA Chidambaram Stadium in Chennai on April 9.

Sanjana has hosted a number of shows on the Indian Premier League (IPL), badminton, etc. for Star Sports. The 28-year-old has also been hosting the weekly show for the IPL franchise Kolkata Knight Riders (KKR) titled ‘Knights Club’.

Sanjana is a Miss India 2014 finalist and the Maharashtra girl also participated in the MTV show Splitsvilla 7 before starting her career as a sports anchor and presenter.