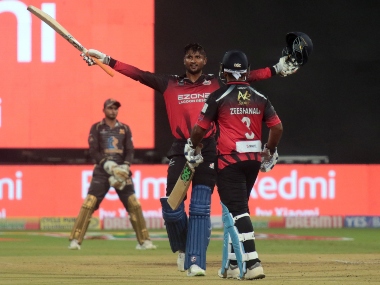 Bengaluru: Krishnappa Gowtham produced a jaw-dropping all-round performance in the history of T20 cricket, smashing a 56-ball 134 and then picking an incredible 8/15 in the Karnataka Premier League.

Playing for Ballari Tuskers in the Karnataka Premier League, the all-rounder smashed the fastest hundred in the tournament’s history, in just 39 balls.

His 134 was also the highest total with the bat in KPL. He also picked up an astonishing 8/15 in his four-over quota. Gowtham also registered the most number of sixes in an innings in KPL, with 13 big hits to his name, as his side won by 70 runs under the VJD method. Even though Gowtham’s effort is better than Colin Ackermann, who registered figures of 7/18 in a Vitality Blast in England earlier this month, it will not be considered an official record in the books, as state T20 leagues are not given an official T20 status.

Instead, the matches are categorised as ‘Other T20s’.

After the match, the Karnataka player said: “I don’t think I expected this, nor did anyone else out here. Thanks to everyone who turned up and supported us.”

On being questioned which one he enjoyed more between batting and bowling, the cricketer came up with a witty reply: “Well, I enjoyed my girlfriend’s smile.”

Gowtham had made a mark for Rajasthan Royals in 2018 IPL when he picked up 11 wickets and aggregated 126 runs at a strike rate of 196.87.
However, in the recently-concluded edition of the IPL, Gowtham played only seven matches.