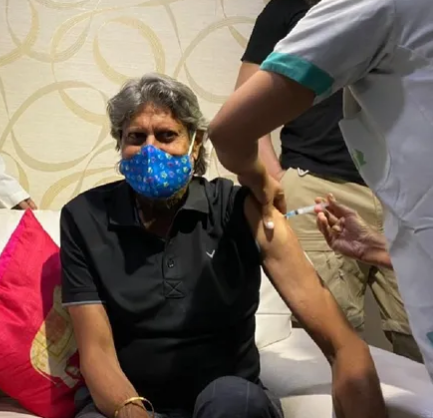 Legendary cricketer Kapil Dev on Wednesday received the first dose of the COVID-19 vaccine at the Fortis Hospital in Delhi.

A host of notable personalities across the country including Prime Minister Narendra Modi himself have received their first dose of the COVID-19 vaccine. The latest to join the bandwagon on Wednesday was legendary cricketer Kapil Dev, who took his first jab at Delhi’s Fortis Hospital.

The former Indian captain became the third cricketer after India head coach Ravi Shastri and former cricketer Madan Lal to get the COVID-19 vaccine in the second phase of the vaccination drive. People above the age of 60 or those between 45-59 with co-morbidities are eligible to get vaccinated in the current drive.

The 1983 World Cup-winning captain had suffered a cardiac arrest in November last year following which he underwent angioplasty. He managed to recover well and was soon back on the golf course. The former India captain is regarded as one of the greatest all-rounders of all-time. He played 131 Tests and 225 ODIs in his illustrious career.

He scored 5248 and 3783 runs in the two formats respectively and also picked up 434 Test and 253 ODI wickets. He remains India’s second-highest wicket-taker in Test cricket behind only Anil Kumble.

Ahead of the fourth Test between India and England in Ahmedabad, India head coach Ravi Shastri had received his first dose of the COVID-19 vaccine. Sharing a picture of himself receiving the vaccine, Shastri had thanked medical professionals and the scientists empowering India against the pandemic.

Shastri is currently in a bio-bubble with the rest of the Indian team in Ahmedabad where the hosts will face England in the final fourth Test starting from Thursday (March 04). India are currently leading the four-match Test series 2-1 after winning the pink-ball Test at the same venue by a thumping ten wickets. India will be looking to continue their winning run in the final Test and secure a spot in the final of the World Test Championship.