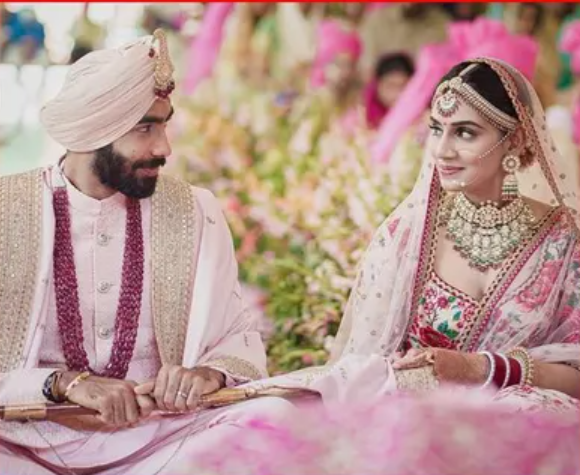 jTeam India’s Test specialist Mayank Agarwal came forward to congratulate the newly-wed couple pacer Jasprit Bumrah, and, sports broadcaster Sanjana Ganesan as they tied the knot in a private ceremony on Monday. However, Agarwal unknowingly ended up making a big mistake while wishing his Indian team-mate and his better half.

It so happened that the opening batsman tagged the wrong person along with Jasprit Bumrah. While he did congratulate the newlywed couple and also blessed them with a lot of happiness and health together, Mayank made one mistake as he tagged former all-rounder as well as Team India batting coach Sanjay Bangar instead of Sanjana Ganesan. While the tweet was deleted, one of the netizens did take a screenshot of the same. 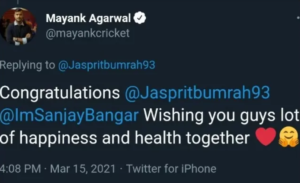 Cricket fans who keep a keen eye on the daily updates of their heros’ lives’ sparked off the rumours on Jasprit Bumrah’s wedding after the cricketer requested leave from BCCI. Reports had been flooding in for quite some time that the 27-year-old was all set to get married. On Monday, the Indian speedster got married to TV presenter Sanjana Ganesan in a private ceremony and shared the announcement of the same via his social media.

Burmah shared a lovely post on his Instagram handle. He went on to caption how he and Sanjana have begun a new journey together that’s “steered by love” and also goes on to mention how March 15 is one of the happiest days of their lives. The Mumbai Indians bowler went on to share how he feels blessed on being able to share the news of their wedding and joy with everyone else.

Meanwhile, Jasprit Bumrah has been rested for the white-ball leg of the ongoing series against England. Sanjana and Jasprit’s marriage saw none of his teammates attend the wedding as all the players are a part of the biosecure bubble put in place by the BCCI. As per unconfirmed reports, it is believed that Bumrah and Ganesan’s marriage took place in a small private ceremony in Goa; the wedding ceremony had limited numbers of guests, consisting mostly of family members, due to COVID-19 protocols across the country.