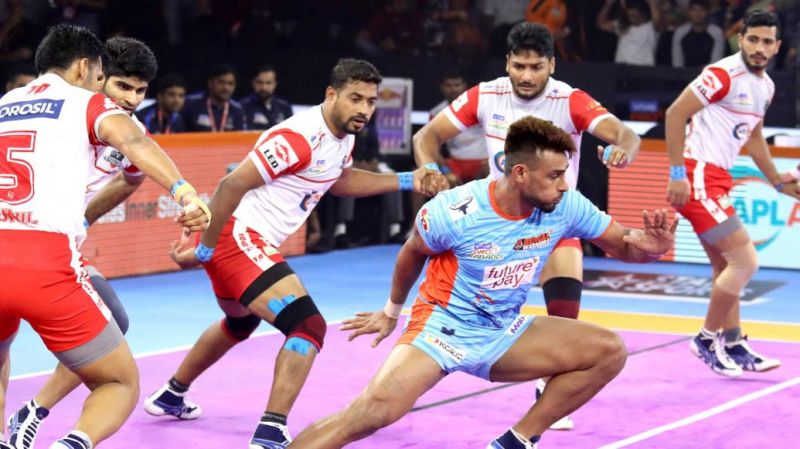 Bengal Warriors defeated the Haryana Steelers for the first time in the history of the Pro Kabaddi League on Thursday. The 48-36 win over the Steelers in Match No. 97 of PKL 2019 enabled the Warriors to remain in the second spot on the points table.

Maninder Singh served a champion-like performance to all his fans after garnering a whopping sum of 18 raid points. Baldev Singh also showcased an out-of-the-world show in defense.

From the Steelers, both Vinay and Vikash Kandola stood out with their performances and collected 14 and 9 points respectively at the Shree Shiv Chhatrapati Sports Complex in Pune.

Maninder Singh started for the Warriors and picked up the first point of the evening. Prashanth Kumar Rai collected a swift bonus and opened the account for the Haryana-based franchise.

Vikash Kandola, one of the most successful raiders of PKL 2019, was surprisingly kept at bay by Bengal’s defense since the very inception. Just under six minutes, the team representing Haryana conceded an ill-fated all-out. The Steelers, who had been terrific in their last few matches, could not do anything to change their fortunes and suffered a second unfortunate all-out just under 13 minutes.

On the other hand, the Warriors deserved nothing less than praises for the excellent teamwork they put up. The end of the first half saw the Bengal-based team in the lead at 30-13. The Steelers clearly required to work harder than ever to reduce the massive lead.

The second half kicked off with Maninder Singh completing the 20th Super 10 of his career. Right after it, the Warriors inflicted a third all-out on the hapless Steelers.

While others struggled, the Steelers’ Vinay continued with his impeccable form and completed his Super 10 in brilliant fashion, followed by which, the Warriors faced their first all-out of the night.

In this offense-heavy battle, the Warriors’ Baldev Singh did a commendable job in defense by pouncing on the rival raiders, thus completing his High 5 in the process. The Bengal Warriors never let go of the intensity and emerged victorious against the Haryana Steelers with the score 48-36, all thanks to the wonderful display in both offense and defense.