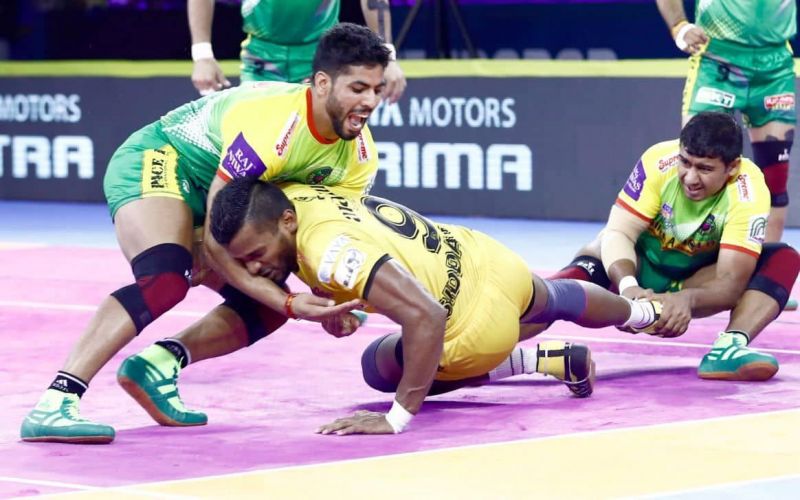 Patna Pirates drew with Telugu Titans 42-42 on Friday on the final day of the Pune leg to have their first tie of Pro Kabaddi 2019.

Pardeep Narwal was the hero of the night with 17 points in his kitty. Hadi Oshtorak also played in aggressive fashion and contributed massively for the green army. Siddharth Desai and Rajnish from the Titans put up champion-like performances and garnered 12 and 10 points respectively.

Siddharth Desai started for the Titans and was instantly sent off the mat by Patna’s defense. The Titans’ defense gave a fitting reply to Patna after catching Pardeep Narwal in his very first raid.

A staggering Super Raid by Rajnish in the 4th minute of the fast-paced clash put the Titans in a 4-3 lead. The three-time champions, Patna conceded an ill-fated all out in the eighth minute itself, despite South Korean Jang Kun Lee’s warrior-like efforts.

Patna’s struggles seemed to be returning in the initial stages of the match. Both the offense and defense of the green army made quite a few school-boy mistakes and gifted a handful of points to the opponents.

Patna demanded a review in the 15th minute for a mere bonus point. The review, upon inspection, was declared successful. The second review by Patna in the 18th minute confirmed Pardeep Narwal’s out-of-the-world four-pointer Super Raid, which made the whole stadium go ecstatic.

Inflicting a superb all-out on the Hyderabad-based franchise, Patna made a comeback right after the completion of the first twenty minutes by reducing the huge lead to just a single point.

The two teams ended the first half on a deadlock at 19 each after a brilliant two-pointer by record-breaker Narwal. The second half began with Narwal sending Farhad Milaghardan off the mat.

Taking full advantage of the review system, Hadi Oshtorak asked for a third one, claiming the opponent defender out. The review was yet again successful. With ten minutes remaining on the clock, the Titans requested a review in Desai’s favour, which turned out to be successful, much to their relief.

Oshtorak, the last man on Patna’s court, dodged the all-out with a laudable two-pointer. However, the inevitable all-out greeted Patna for the second time that night in the 32nd minute.

Ultimately, the war of the stars concluded on a tie at 42 each. The nail-biting face-off was full of thrills, where both teams displayed a laudable game.