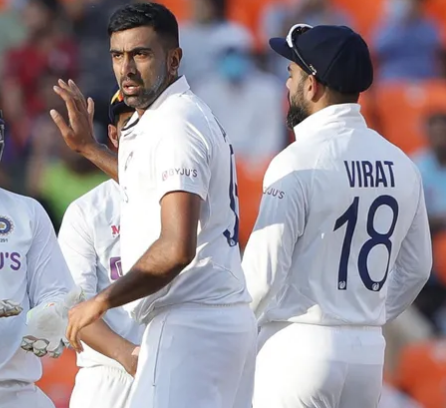 Wasim Jaffer trolled England while sharing a video of R Ashwin responding to a British journalist’s query on the pitch used for the third Test between Inda and England in Ahmedabad.

Former India batsman and Punjab Kings batting coach Wasim Jaffer took a hilarious dig at England after senior Indian spinner R Ashwin shut down the critics of the Ahmedabad pitch. The track at the newly-renovated Narendra Modi Cricket Stadium in Ahmedabad has come under the scanner after the third Test between India and England finished inside just two days.

Several former cricketers and experts have questioned the quality of the pitch used for the pink-ball Test which India won comfortably by ten wickets. On a viciously turning track, Ashwin and Axar Patel combined to take 18 out of 20 England wickets to set up an easy win for the hosts.

On Saturday, Jaffer shared a video of Ashwin responding to a British journalist’s query regarding the quality of pitch used for the third Test in Ahmedabad and questioned him “What makes a good surface?” and who defines that. Sharing the video, Jaffer wrote – “@ashwinravi99 taking English wickets both on and off the field.

The British journalist had asked Ashwin if he thought the track used at the Narendra Modi Stadium for the pink-ball game was good for Test cricket. Ashwin was quick to respond and came up with a counter. “I have a question back. What is a good cricket surface?,” Ashwin asked the journalist.

“I am the one asking the question… good contest between bat and ball?” the scribe responded before Ashwin asked who makes the rules when it comes to pitches.

“What makes a good surface? Who defines this? Seam on the first day and then bat well and then spin on the last two days? Come on! Who makes all these rules, we need to get over it and not talk about whatever picture you want to paint,” said Ashwin, who clearly looked like he had enough of the ongoing debate over the Ahmedabad pitch.

“If you are asking if it is a good Test surface, I don’t see any of the players coming from England having an issue with the surface. They want to improve, they look like they want to have a contest.

“Is it the players and the people who are reporting back that want their players to not complete and complain about the pitches? Because we have never done that on any of the tours,” he concluded.

Ashwin and Axar ran riot against England as the visitors were bundled out for 112 and 81 runs respectively in their two innings. Indian batsmen also struggled against spin and managed to post only 145 in their first innings but Virat Kohli & Co. won the pink-ball Test comfortably after chasing down the target of 49 runs in their second innings without breaking a sweat.