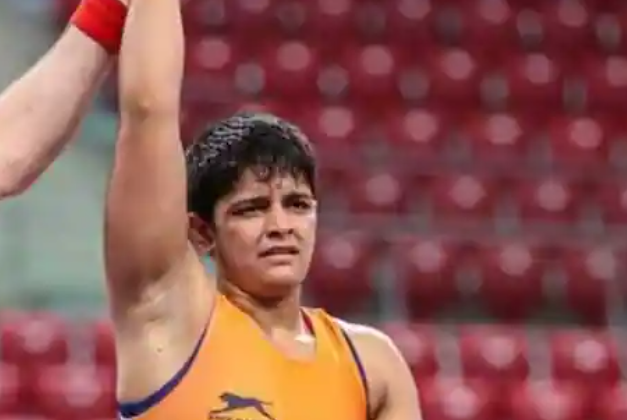 Ajmer was preparing her for the 2024 Olympics. Sonam believed she had a few years left before breaking into the national side, rubbing shoulders with the likes of Sakshi and Vinesh Phogat. Now the sudden change of plans was baffling for Sonam.

Ajmer Malik recalls the moment last year when he told his trainee Sonam Malik that she has a big fight coming up – against Rio Olympics bronze medallist Sakshi Malik in the national selection trials for the Asian Championships.

“Her face turned pale as if she had seen a ghost,” says coach Ajmer.

Sonam, with two gold medals (2017, 2019) and bronze (2018) at Cadet World Championships had world-beating potential, yet she was just a teenage rookie. Ajmer was preparing her for the 2024 Olympics. Sonam believed she had a few years left before breaking into the national side, rubbing shoulders with the likes of Sakshi and Vinesh Phogat. Now the sudden change of plans was baffling for Sonam.

It took long hours of cajoling from Ajmer to make her understand that she was ready to fight against the best in India. He spent more time fighting Sonam’s case with the Wrestling Federation of India to put her in the trials. “They had a point. Sonam was still 17. She had little experience of even competing in the junior international circuit. It can be devastating for a young girl and there could be chances of injury. But finally they relented,” says Ajmer.

Ajmer, a retired Army subedar and former wrestler, has been training Sonam since she was 11. He had put all his retirement benefits to start the Netaji Subhash Chandra Bose Sports Academy in Madina village, Sonipat. Ajmer and Sonam’s father Rajendra Malik, also a former wrestler, were friends but they could never realize their dreams.

“We had limited means to train. So, we could not do much. I competed in nationals championships from the Army but then I had to stop wrestling after a knee surgery. In Sonam, we saw those dreams again. She is talented and we have the means to take her to the top level,” says Ajmer.

He was preparing to fast-track Sonam into national reckoning with bouts against Sakshi. Deep within, Ajmer had made his calculations. After seeing Sonam was easily beating some of the women who were in the national squad, or fringes of national selection, in local competitions, Ajmer believed she was ready.

“There was nothing to lose. I told Sonam, ‘This is not a competition for you. Treat it just like a training session. We are still preparing for the 2024 Olympics.’ I know if she is able to execute what she does in training, she will give her a good fight. I just wanted to test her and it was a great opportunity to know her level,” says Ajmer.

It turned out to be a defining moment in Sonam’s fledgling career as she beat the Olympic medallist. Since that trial in January last year, Sonam has met Sakshi on three more occasions and beaten her each time, including in the final of the National Championships this year. She has made a resounding claim again and again that she is India’s best wrestler in the 62kg category.

Ask her about Sakshi and the fan in her takes over. “Sakshi di is my idol. I saw her on TV at the Rio Olympics winning the medal for India. I was very nervous in the first bout but my coach sir told me ‘you have nothing to lose, just give your best,” says Sonam, 18.

In her first showdown with Sakshi, Sonam made a stunning comeback trailing 10-2. She closed the gap to 10-6 and with seconds left on the clock, she executed a four-point throw to claim victory. There was enough left in her tank to clap and cheer herself on the mat.

In the second selection trials a month later, Sonam was behind by a point (1-2) when she pinned Sakshi down. This year at the national championships, Sonam kept an attacking Sakshi and pulled off a leg trip at a decisive moment to edge past 7-5. And in the trials for Tokyo Olympics qualifiers last month, Sonam’s four-point throw, from 2-4 down, saw her win 8-7.

She has grown in confidence with every bout against Sakshi, finding openings at crucial times, showing intelligence on the mat and using attacks that has even left her coach Ajmer surprised.

“She has used certain moves that she doesn’t generally use in training, but when she sees an opportunity she is able to execute them, which shows she is thinking on the mat,” says Ajmer.

Every bout with Sakshi has been a learning curve for Sonam.

“Now we know each other so well. Still every time it seems like a new bout. Sakshi di surprised me in the nationals with her attacks but I was able to counter,” says Sonam.

Yet, even as Sonam stalled Sakshi’s dreams of a second Olympic medal, the senior wrestler is generous enough to help the teenager at the national camp.

“I often spar with her and she tells me if I do something wrong,” says Sonam.