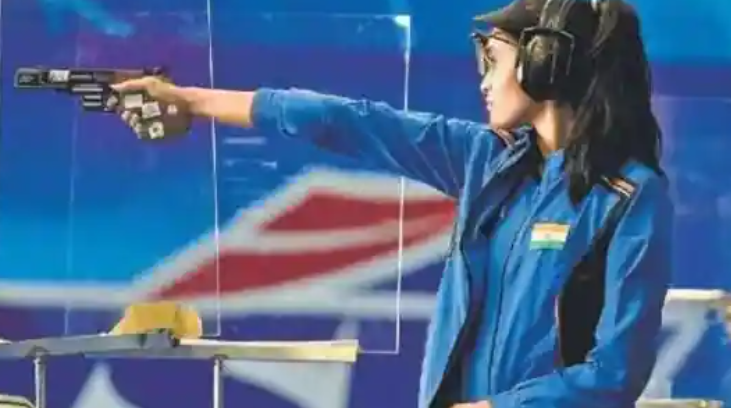 Hosts sweep 25m air pistol women’s event; 20-year-old Tomar bags maiden gold in 50m rifle 3 positions.
Euphoria swept through the stands as the scoreboard flashed the result at the end of the 25m sports pistol final at the ISSF World Cup here. Chinki Yadav, Rahi Sarnobat and Manu Bhaker–in that order–occupied the first three places. A gold-silver-bronze for India. On a day that India recorded their best ever performance at a shooting world cup, reaching a record tally of nine gold medals–the most by any nation in a single edition–the action was relentless.

What that scoreboard did not reveal was how much it mattered to the three shooters engaged in the nerve-wracking contest. All three have Tokyo Olympics quota places– Chinki and Sarnobat have it in the event they were competing in; Bhaker, by virtue of her quota in 10m air pistol, can also compete in 25m pistol. But only two shooters from a single country can compete in any one event at the Olympics, so all three had a point to prove here. The pressure was more on Yadav, because there has been talk that the qouta she won may be redistributed to another shooter ever since she got it at the Asian Championships in Doha in 2019.

On Wednesday, Yadav was firing with a mission, fiercely protecting her quota and making a bold statement with an eye on Tokyo. She defeated Sarnobat in a tense shoot-off to win her first World Cup gold.

“When you have so much at stake to perform, you definitely feel the pressure. Important is to focus on your performance,” Yadav, 23, said. “During the shoot-off, it was never at the back of my mind who will come first. All I was thinking about was giving my best. The gold has given me confidence and a huge boost before the Olympics.”

Yadav, who started shooting when she was 14, literally grew up on a range; her father works as an electrician for the sports complex which houses the Madhya Pradesh Shooting academy in Bhopal, and Yadav’s childhood was spent in the family’s one-room apartment at the complex.

The day’s excitement was sparked off by another first-time gold medallist, this time in rifle 3-positions, where 20-year-old Aishwary Pratap Singh Tomar blew through a strong field that included the World Championships gold medallist Steffen Olsen of Denmark.India’s tally has now swelled to nine gold, five silver and five bronze medals. The USA is in second place with three gold, two silver and one bronze. Three top shooting nations–China, Germany and Russia–have skipped the tournament, but Indian shooters have extended their domination in rifle/pistol World Cups, having finished on top in five tournaments in 2019—beating China to second place each time. This is a combined World Cup and shotgun is also part of it. The international shooting federation (ISSF) has added nine new events in the programme this time, introducing team events in rifle, pistol and shotgun, with an eye on the next Olympic cycle. In skeet, India have broken new ground winning gold medals in men’s team and mixed team. 20-year-old Ganemat Sekhon won a historic bronze in individual competition–the first for the country in women’s skeet, while the women’s team has won silver.

Tomar too learnt the sport at the Madhya Pradesh Shooting Academy. He won gold with a score of 462.5 in the 45-shot final. Hungarian world No 5

Istvan Peni got silver with 461.6 and Olsen the bronze. Tomar took the lead after 15 shots (155) in kneeling position but was overtaken by Olsen in the prone position. He stepped up in the standing position; 10.9s in the fifth series and the penultimate series saw him pull ahead of Peni and Olsen. A difference of 0.9 separated Peni and Tomar before the last shot. A 10.3 sealed the gold for Tomar.

National Rifle Association of India president Raninder Singh said the team for Tokyo Olympics will be announced within a week after the conclusion of the World Cup on March 29.

“The current form is a small part of the Olympic selection policy. Because of the extraordinary situation of Covid, we will look at the current form but it will not be everything. Don’t look for substantial changes. I can’t go any further. We are not looking at medals but qualification scores and final performances,” he said.

Asked whether there can be new faces in the team, he said: “That is for the selectors to decide but there is no great upheaval.”

The national championships are scheduled to take place in Bhopal and New Delhi in April but now looks doubtful.

“My main concern is the national championship. It will be difficult to hold in the current situation. We will take a call whether it has to be postponed. For two years in a row I am losing my crop,” Singh said.