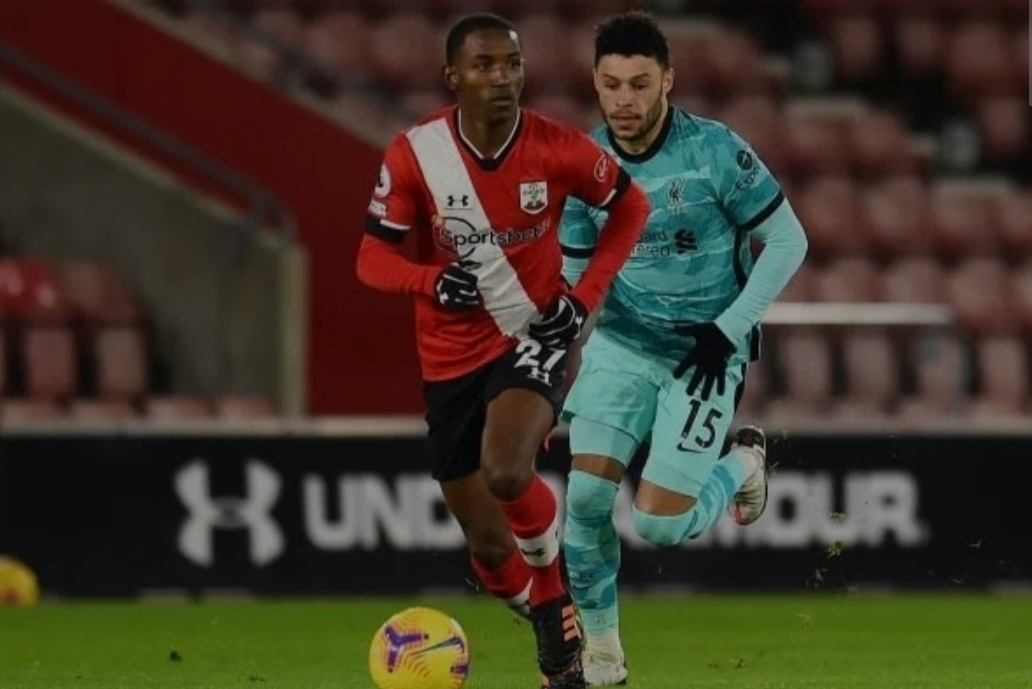 Liverpool’s Premier League title defence suffered a setback as they fell to defeat at Southampton on Monday.

Jurgen Klopp’s Liverpool side, for whom this was a second league loss of the season, remain top of the table on goal difference but have taken only two points from the past nine available.

Both Manchester United and Manchester City will leapfrog the reigning champions if they win their games in hand.

Southampton’s first win in five Premier League games sees them climb to sixth and brought an emotional response from manager Ralph Hasenhuttl, who sank to his knees to celebrate taking points against a side led by Klopp for the first time.

And the hosts were good value for their victory, forcing the pace early on against an unfamiliar Reds backline containing Jordan Henderson, and then defending resolutely as the visitors poured forward after the break

While Liverpool can point to the huge void at the heart of their defence and several injured stars, it should also be acknowledged that Southampton began this contest without several key performers.

And with Jannik Vestergaard, Oriol Romeu and Che Adams also injured, Hasenhuttl could ill afford to see Moussa Djenepo limp off after 32 minutes, during which he had caused Trent Alexander-Arnold several problems down the left.

Initially at least, they continued to play in their normal style, trying to retain possession and work the ball into promising positions out wide.

Nathan Tella’s curling, right-foot shot, after Ings had expertly cushioned the ball into his path, almost brought the reward of a second goal.

However, after the break it was very much a rearguard action from the Saints, with Kyle Walker-Peters, Jan Bednarek and Jack Stephens making seven clearances each to repel wave after wave of Liverpool attacks.

Before kick-off at St Mary’s on Monday, Klopp had said he could be blamed if the decision to deploy Henderson alongside Fabinho, another midfielder, in defence did not work.

And privately, inside two minutes, the German must have wished that he had reconsidered his selections.

From their turquoise away kit, to their makeshift defence and a completely reworked midfield – in which Thiago Alcantara made his first start since the Merseyside derby on 17 October – there was an out-of-character feel to his team’s performance.

They certainly looked a shadow of the side who had scored 12 goals and conceded just twice in their past four meetings with the Saints.

Andy Robertson and Alexander-Arnold, so often attacking outlets on either flank, found the movement of Stuart Armstrong and Djenepo difficult to contain when asked to defend.

Premier League top scorer Mohamed Salah failed to have a shot on target, as did fellow forward Robert Firmino.

Mane, who was Liverpool’s liveliest attacker, did see a claim for a penalty waved away when he went down under a challenge from Walker-Peters, but there was a noticeable lack of spark from a side who have now drawn a blank for a second game in a row

‘It’s a perfect evening’ – what they said

Southampton manager Hasenhuttl to BBC Sport: “There were tears in my eyes – because of the wind! When you see our guys fighting with everything they have it makes me really proud. You need to have the perfect game against Liverpool and I think we did have that.

“It felt like we were under massive pressure and the defending around the box was the key today – and then we still tried to play football. We did it in a good way.

“It was an intense game; my voice is nearly gone. The guys are tired, you have to be to win against such a team. The guys believed in what they were doing.

Liverpool manager Klopp to BBC Sport: “What was disappointing? How long have we got? The start, obviously – not only the goal but the start in general. Congratulations to Southampton – they deserved it.

“You know exactly what you are going to get from them. You cannot be surprised but we looked surprised.

“It’s not rocket science. We should have done much better. We played into their hands with the start.

“They put a lot of work in. Our decision making was just not good. That is how it is when you don’t have momentum. We should have had much more chances.

“These are outstanding players but they were not ready from the start. Sadio Mane should have had a penalty tonight, and there was the handball – I’ve no idea.

“It’s not an excuse for the performance, but you can get a point if they are given. Now we have to show a reaction.