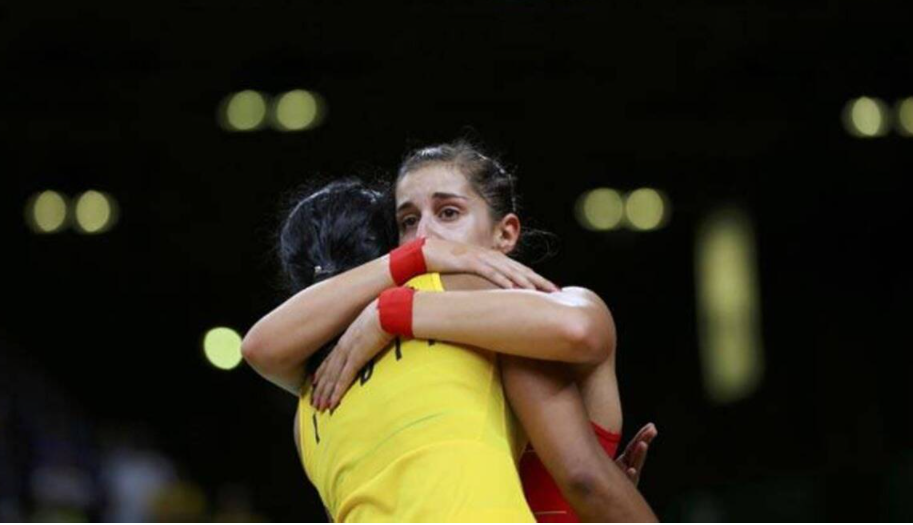 21-5 is a sobering scoreline, besides being a nightmarish parting memory to have of St Jakobshalle, where P V SINDHU.became World Champion in 2019. But Carolina Marin was in tearing hurry – 35 is all she needed to imprint that score on the Indian’s mind, and erase all fondness for Basel.

Galloping around the court, turning every net interception into an ambush and pouncing on Sindhu’s progressively jittery serves, Marin ensured that everything that went up came down – with a thudding fall. The 21-12, 21-5 Swiss Open final defeat saw Sindhu score the least points against the rampaging Spaniard in 14 meetings.

From inwardly believing that she can fight for gold at Tokyo, to being harried out breathless and clueless in her first final in 18 months, would read ominous, if there wasn’t the comfort of four months to go to Tokyo, and seven for the Huelva World Championships – two events Marin wants to absolutely lord over.

The debriefing for Basel 2021 would be short and snappy – Marin’s pace is lethal, bordering on intimidating. Her speed has always troubled the rest of the world, and while those with niche talents of deception or retrieval find their own ways, Sindhu will need to be tactically on song, exploiting Marin’s deep backhand corner or pinning her back on the forehand edge or impatience in long rallies, to stand a chance of countering her.

It’s more out of a conscious desire that Marin loomed on the forecourt – in Sindhu’s face, and poured in everything into the speed igniting her first two or three shots of any rally. There might be just half a dozen rallies that Marin allowed to go into the double-digit back-and-forth. Her smothering of Sindhu’s serve with lightning-quick reactions was pure savagery – incidentally last seen when Sindhu was pulverising Nozomi Okuhara’s drives at the same stadium in the 2019 World Championship final.

Both tried pushing each other to the backcourt until 6-6, but the pace was fifth gear from the start. For two straight days now, Viktor Axelsen has blitzed Kidambi Srikanth and Marin assailed Sindhu in the first few minutes, to deny them any comeback – though Srikanth cleverly put doubts in the Dane’s head before going down in two games. But mentally and physically, Indians are not looking sturdy enough to withstand the early storm to launch successful fightbacks. Sindhu looked dazed even. And helpless.

From 8-9 in the opener, the World No. 7 could muster just four more points as Marin rushed through the first game. And that too only in rallies that she could extend, like at 11-19. Akane Yamaguchi, Tai Tzu-Ying, and in the semifinal, Pornpawee Chochuwong – all give themselves a chance against Marin by extending the rallies and preying on her perennial hurry to finish things off.

Sindhu way off the pace and power

The Spaniard, Olympic champion, was not only leaving scars in real-time. She was opening up wounds in Sindhu’s confidence as the match went along – trailing 2-9 in the second, the Indian had an open court to finish a net charge. But she was so nettled by what had happened, how she had careened off track, that she sent the straightest of smashes long.

Work to be done

If Basel showed her the amount of work left to do to beat someone like Marin, Birmingham and All ENGLAND will give Sindhu a good idea of Japanese preparations, especially Yamaguchi’s. And where she stands herself. The Indian has never been one to go into big events needing to have won many titles. She can come out of nowhere and beat Tai Tzu-Ying – as she has at the Olympics and Worlds. But Sindhu’s never allowed demons to build in her head vis a vis a player; Marin and Yamaguchi threaten to blow up into something like that.

Sindhu is a far more versatile player now than she was in 2016. Her court craft and range of strokes have both expanded. But she’s five years older and physically not in the best of shape – though with four months in hand. Though against Marin, who’s got even faster, Sindhu will need more than just power in her smash. Marin proved that Sindhu can be ambushed tactically. Small mercies – the lesson was imparted early in a big season.