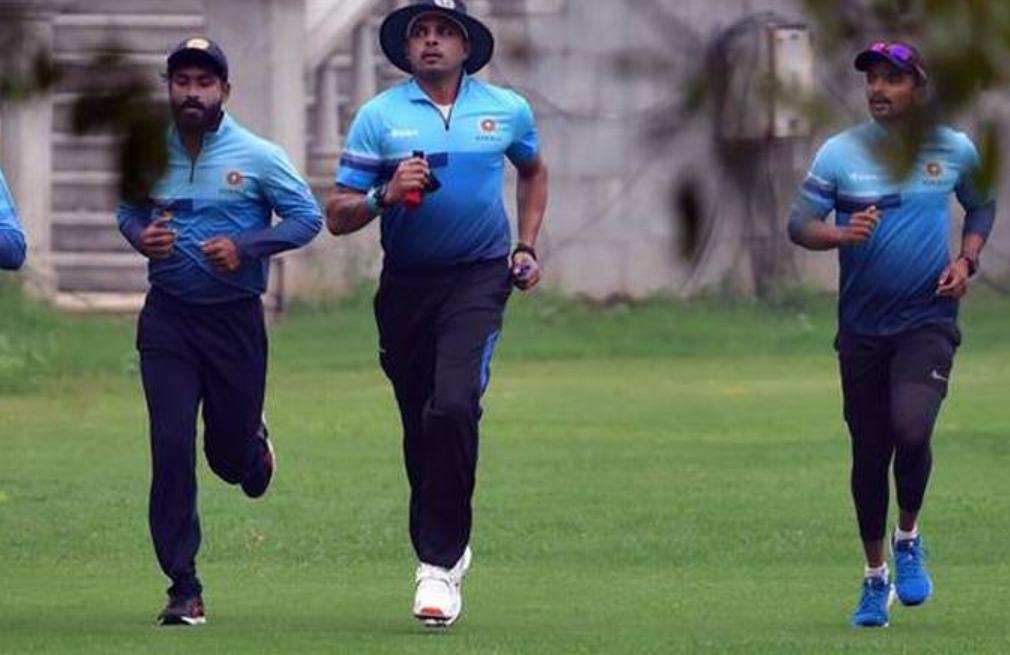 Get the Syed Mushtaq Ali Trophy live score, updates and commentary from Day 1 of the 2020-21 season, with Vidarbha, Mumbai and Kerala among the teams in action.

hello and welcome to Sportstar’s coverage of the Syed Mushtaq Ali Trophy 2021 matches being played in seven centres across India.

That’s it for tonight, folks. Do join us for another exciting day of domestic T20 cricket tomorrow at 12 PM.

Result: A fairly dominant performance from Kerala tonight. Puducherry never got its innings together with Kerala’s spinners in particular restricting the scoring. Jalal Saxena’s excellent spell of 3/13 broke the opponent’s middle-order as they barely managed to reach 138/6.

In reply, openers Uthappa and Azharuddeen provided a breezy start for Kerala. The duo put on 52 for the opening wicket before being dismissed. Skipper Sanju Samson and Sachin Baby anchored the chase further but failed to close the game on their own. Puducherry’s late surge delayed Kerala’s win and Salman Nizar and Vishnu Vinod eventually led Kerala home in the 19th over.

There it is. Kerala beats Puducherry by six wickets. Nizar and Vinod closes the match in the 19th over without breaking much sweat.

Kerala 137/4 after 18 overs: A comfortable win on the cards here for Kerala, two away from the finish line.

Kerala 133/4 after 17 overs: Marimuthu misfields at deep point to concede a boundary. Ashith is not a happy man as he finishes his spell with figures of 4-0-18-3. Kerala is nearly there with six required from three overs.

Kerala 125/4 after 16 overs: Nizar and Vinod have broken the shackles. Pankaj Singh is first taken down by Nizar for a six over covers and Vinod finishes the over with a cheeky upper-cut over the keeper. Kerala is nearly there. 14 needed of 24 balls.

Kerala 113/4 after 15 overs: A splendid spell from Ashith Rajiv. Puducherry has kept the batsmen silent for two overs and Rajiv has churned out the dot balls. Nizar and Vinod fails to exchange the strike.

Kerala 108/4 after 13 overs: Ashith Rajiv’s fine outing continues. He removes the well-set pair of Sachin Baby and Sanju Samson in succession. Baby edged a pacy full delivery from Ashith off the first ball. Sanju, not bogged by the wicket pulls a massive six. Ashith quickly gets the ball to move short and Samson slashes straight onto Marimuth at point who dives forward to take the catch.

Kerala 101/2 after 12 overs: Samson is making a move here. A cracking six and a boundary over covers. He’s in a hurry now!

Kerala 88/2 after 11 overs: First real hint of aggression from Samson. He steps out to hit Udeshi over covers, nearly crossing the boundary on the full. Kerala cruising to the finish line here.

Kerala 81/2 after 10 overs: It has been a quiet couple of overs for Kerala. There is no undue risks at the moment and Samson and Sachin keeps it that way. Fair to note that Samson has struggled to revert the strike back to Sachin who is maintaining the run flow without scoring a boundary yet. Kerala needs 58 off the last 10 overs.

Kerala 62/2 after 7 overs: Puducherry keeps the experienced duo quiet. Samson has opted to make a watchful start and Udeshi motors through a fine over.

Kerala 58/2 after 6 overs: Robin Uthappa has gifted his wicket away. He tries to glide the Ashith Rajiv down to third man but seems to have not noticed the fielder present at short third. He slices it straight to Sagar Udeshi. Sachin Baby joins Sanju Samson at the end of the Powerplay. Uthappa c Udeshi b Ashith 21

Kerala 57/1 after 5 overs: Azharuddeen departs after a rollicking start. Sagar Udeshi rushes the ball in him and the Kerala opener fails to make contact off the back-foot. Sanju Samson has come in to join Uthappa who has looked in good touch as well. Azharuddeen b Sagar Udeshi 30

Kerala 48/0 after 4 overs: Uthappa gets the strike after a brief period and hits the former Kerala man, Fabid for a reverse sweep and doubles it up with a conventional version. Azharuddeen then hits Fabid for another resounding six down the ground. It has been a sight to watch him bat tonight.

Kerala 32/0 after 3 overs: Azharuddeen with some flair and authority. He has disrupted the big man P

man Pankaj Singh with an array of delectable square cuts.

Kerala 19/0 after 2 overs: A loud thud surrounds the ground after Azharuddeen smashes Trivedi for a huge six over long-on. He was anticipating the short ball, waits for it and swings the bat with flair. Kerala is off to a good start here.

Kerala 9/0 after 1 over: Uthappa has run a three at the Wankhede in a T20 game. How often has it happened at this frenzied outfield? The opening pair has started well.

Kerala’s chase is underway. Pankaj Singh to open the bowling for Puducherry. Robin Uthappa and Azharuddeen opens the innings for Kerala.

This has been a fine performance by Sanju Samson and his men. Samson rotated the bowlers well throughout the 20 overs with comeback man Sreesanth starting up with a 3-over opening spell. After a slightly jarring start, the 37-year-old found his rhythm as he cleaned up Fabid Ahmed to get a wicket on return and finished with figures of 1/28. But the man of the night was Jalaj Saxena!

It has been an excellent spell from the offie who made it hard for the Puducherry batsmen to make a move on. Saxena ran through the middle-order and finishes with excellent figures of 3/13 from four overs. Kerala needs 139 for its first win in the tournament.

Puducherry 138/6 after 20 overs: Some relief for Puducherry as Ashith Rajiv smashes a six off Asif of the final ball. A 13-run over to end the innings.

Puducherry 125/6 after 19 overs: After a nine-run 18th over from Asif, Thampi returns to finish his spell but concedes another huge six down the ground to Ashith Rajiv. The batsmen are scampering for a run every ball now. Thampi finishes his spell at 4-0-32-0

Puducherry 105/6 after 17 overs: It has been an off-day for Basil Thampi. After conceding just one run of the first over, Thampi tweaks his line unnecessarily and Ashith Rajiv hooks the ball for a massive six.

Puducherry 97/6 after 16 overs: Midhun finishes his spell in typical manner. Induces a lot more dot balls and an excellent spell without much rewards ends at 4-0-21-0.

Puducherry 92/6 after 15 overs: Sreesanth finishes his spell with a rather fine over even as Puducherry has lost its tooth by now. He keeps the ball up-front and forces the batsmen to deal in singles. Sreesanth bows down to the pitch at the end of the over as he has been overwhelmed by emotion there.

Puducherry 89/6 after 14 overs: This has been a sensational spell from Saxena! He loops the ball and forces the left-handed Trivedi to go for the slog. Trivedi mishits and finds Uthappa right under the ball. Saxena finishes his spell at 4-0-13-3.

Puducherry 87/5 after 13 overs: Skipper Samson must be happy with the performance of his spinners. Midhun rushes through another over within a minute. Compact line and Kerala is keeping the runs under check.

Puducherry 84/5 after 12 overs: Saxena is on a roll here, folks! Dogra tries to challenge Saxena’s accurate line and attempts another reverse-sweep. He misses it altogether as the offie snatches another wicket. He maintains the stranglehold on the batsmen through the over once again. Dogra b Saxena 26

Puducherry 82/4 after 11 overs: Asif returns to the attack and leaks one too many. His erratic line has been capitalised by the new man Trivedi who smashes a six over long-off and hits a boundary through mid-wicket of the very next delivery. Puducherry trying to make the move now.

Puducherry 71/4 after 10 overs: A brilliant over from the domestic veteran! Saxena rushes in another delivery which slides down leg. Marimuthu shabbily plays all around it and the ball hits his legs before crashing into the stumps. He departs of the first ball without troubling the scores. Marimuthu b Saxena 0

Puducherry 69/3 after 9 overs: Just when Jackson was getting a move on with a classical square cut boundary, his partner has caught him in a mix-up. Dogra and Jackson find themselves at the striker’s end as Sachin Baby picked the ball quickly. He throws it swiftly to Midhun who does no wrong to hit the stumps. Jackson 17 runout (Baby)

Puducherry 59/2 after 8 overs: Jalal Saxena into the attack and he foxes Dogra twice with classical off-breaks. Dogra breaks the shackles with a reverse-sweep boundary through point.

Puducherry 52/2 after 7 overs: A fine over from S Midhun. Keeps the bowl tight on to the stumps and Sheldon Jackson fails to get the singles to rotate strike.

Puducherry 48/2 after 6 overs: Sreesanth concedes a boundary of the first ball but continues to pitch the ball up. He is unlucky to see another four runs to his tally as Salman Nizar misfields at the deep midwicket boundary. Puducherry is building up from the loss of two wickets as Dogra has looked solid so far.

Sreesanth back for a third over on the trot.

Puducherry 38/2 after 5 overs: Sanju Samson rolling in the changes. Brings Thampi back into the attack. Looks more in control with the ball this time but Paras Dogra smashed the only loose delivery of the over through the covers.

Puducherry 32/2 after 4 overs: Sreesanth must be a relieved man! He squares up Fabid Ahmed of the second ball of his second over. The ball did not seem to move inward as much as Ahmed expected as he played down the wrong. Sreesanth rattles the stumps to get a wicket on comeback.  Ahmed b Sreesanth 10 (7)

Puducherry 26/1 after 3 overs: CSK paceman KM Asif replaced Basil Thampi after just one over and a fine start to his spell. Asif’s outswingers trouble the Puducherry skipper Rohit twice before he holed out to a poor shot to covers.  Rohit c Azharuddeen b Asif 10

Puducherry 21/0 after 2 overs: It was a fine ball to start with on return for Sreesanth but he lost his line thereafter. The ball kept sliding down leg and the skipper Rohit played another fine short to midwicket to get the runs moving.

Comeback man Sreesanth with the new-ball.

Puducherry 8/0 after 1 over: It was a fine start from Basil Thampi, but the Kerala paceman pulls the ball short and Rohit D smashes a cracking pull for six off the final ball.

Toss updates from Kerala-Puducherry coming up….

Kerala’s Sreesanth may mark his return after eight years through the tournament. Can the 37-year-old mind and body retain a little of that old self? The spotlight will be on him like so many others during the course of this tournament. Here are a few more stars to watch out for Syed Mushtaq Ali Trophy 2020-21