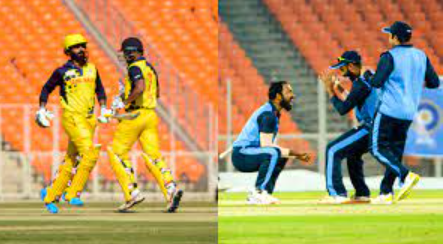 Lukman Meriwala, just like every other Indian domestic cricketer, spent months wondering about when the season will get going. The COVID-19 pandemic kept delaying BCCI’s plans to host the domestic season. Only on December 13, it was confirmed the Syed Mushtaq Ali Trophy will be played from January 10.

With months of uncertainty behind them, Meriwala, along with his teammates, gathered at their bio-bubble in Vadodara. But even before they could get on the field, there was more uncertainty. Deepak Hooda’s squabble with Krunal Pandya saw the former leave the camp in haste. Pandya himself could play just three matches before leaving the bubble to attend his father’s funeral. Kedar Devdhar was left with an inexperienced squad and a task to rally the troops.

Meriwala, on Sunday (January 31), will take the field as the fourth-highest wicket-taker in the tournament. With the IPL auction on February 18, will the left-arm pacer be thinking of a contract? Maybe. It’s also the perfect opportunity for him to shut out the outside noise and put on one final show to present his case. And then there is, R Sai Kishore, for whom an IPL contract isn’t a worry. The left-arm spinner, who has an astonishing economy of 5.16 so far in seven matches, has already been retained by Chennai Super Kings. But there’s another catch for the 24-year-old. With IPL venues still not decided, there’s no certainty he’ll get games if the tournament isn’t played in favourable conditions.

Both Meriwala and Sai Kishore walk into the contest with a bigger goal in front of them. The last time Tamil Nadu won the Syed Mushtaq Ali tournament was in 2006-07. Meriwala was part of the Baroda team that won the tournament in 2013-14 and starred in the final with three wickets in the three-run win over Uttar Pradesh.

Tamil Nadu have been ruthless and are unbeaten so far in seven games. Baroda, too, have had a similar run with seven wins in as many games. Tamil Nadu, however, will be vary of their opponents even though they have a better outfit on paper. Because not too long ago, a team in Australia with their major stars missing, showed how to fight against the odds and produce a defining performance.

What to expect: Under lights, in the last two games at the venue, it’s been tough to chase down a total. Tamil Nadu, in their quarterfinal clash against Himachal Pradesh in an evening game, won with five wickets in hand. However, the pressure of the final, against a rampaging Baroda unit, Dinesh Karthik will be a brave man to win the toss and give away the choice of controlling the game by bowling first. A decision that had backfired just the last season when they went down in a thriller against Karnataka.

With both units wearing a settled look, it’s unlikely they’ll be tempted to make any last-minute changes. A late injury, or a niggle, could change things a bit though.