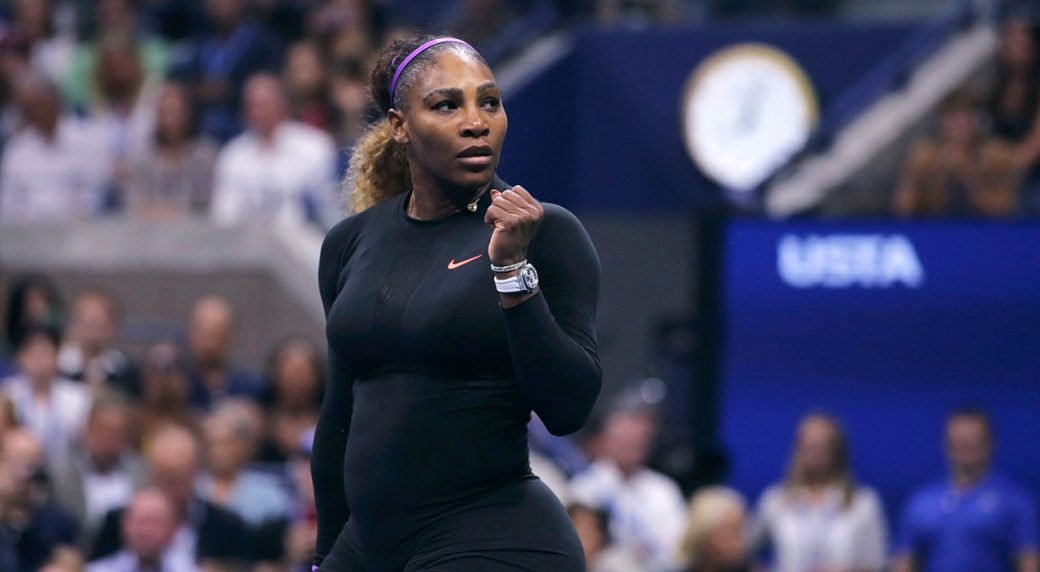 When you see a lopsided score in tennis, you assume one of two things: 1) The winner was on fire, or 2) The loser didn’t show up. The reality, however, is usually somewhere between the two extremes. It takes two to tango in tennis, and you can’t excel or flop in isolation from what your opponent is doing.

Where does Serena Williams’ barely believable 6-1, 6-0 win over Wang Qiang in Tuesday’s quarter-final fall on the excel-flop line? The stats suggest that it was a mismatch of epic proportions: The match lasted all of 44 minutes, and Wang won a grand total of 15 points over two sets. But it was still a night to remember because of how dramatically the complexion of the match changed the moment Serena decided to take things in her own hands. Serena Williams’ raw power was too hot to handle for Wang Qiang. AFP

The start of the match was more about Wang floundering than Serena soaring. The Chinese was playing her first-ever Slam quarter-final, and that showed in her early body language. With seemingly no idea of how to deal with the spotlight of such a big stage, Wang looked tentative and nervous. She either sprayed her shots long or let them hang too short, and Serena quickly sealed an early break.

Maybe it was the whiff of an easy prey that fired Serena up. Or maybe it was just that she wanted to show the world what belonging to the big stage really meant. Whatever the reason, she lifted her game to such a level after the first couple of games that the contest was soon reduced to a joke.

Serena pounced on anything remotely short, and hit the ball with searing pace to practically every corner of the court. Blazing winners left, right and centre, she jumped to a double break lead over the shell-shocked Wang.

The serve has always been Serena’s strength, but on this day her return was perhaps even more devastating. She stood a foot inside the baseline even for Wang’s first serves, and swatted the ball away as though it was a particularly annoying mosquito. Wang might have been praying that there were actually a horde of mosquitoes around Serena, because at least they would have been able to sting back; she herself couldn’t make the slightest dent in Serena’s confidence.

The stat-sheet flashing at the bottom of our TV screen showed that Serena was hitting her backhand an average of 5mph faster than she had been hitting it all tournament, but we didn’t need that numerical validation to know that she was playing at a standard that was high even for her.

Did Wang’s playing style help Serena? The Chinese is a steady baseliner who hits the ball in a very straightforward fashion. She uses flat shots to place the ball wherever her opponent isn’t, and that works well against players who take a lot of risks.

In theory, that should have troubled Serena a little too. But in reality, nothing can really work against Serena when she’s in that kind of mood.

The American ended with 25 winners on the night, and most of them didn’t even have to be very close to the lines. How many did Wang hit? A remarkable zero. There’s beat-downs, and then there’s this.

The win gave Serena her 100th win at the US Open, making her just the second player ever (after Chris Evert) to reach that milestone.

“I never thought I would get to 100 and still be here, but I love what I do,” she said after the match, and nobody can doubt that. Serena certainly loves what she does, which is why she can get up match after match, year after year, and produce displays like these.

Statistically, this is Serena’s most commanding win since her return from childbirth. Why did it come against Wang though? She had never played against the Chinese before, so it wasn’t like she had an old score to settle. Wang is also not what you’d call a challenger to Serena’s aura, which suggested the American would have struggled to maintain her intensity from start to finish.

In other words, Wang Qiang is not Maria Sharapova. That makes Serena’s performance all the more incredible.

“When I’m playing someone I know is playing well I know I have to step up or go home, and I want to stay here,” Serena said.

There can be no higher praise for Wang than the fact that Serena believed she had to step up her game or risk losing. That, despite the score and the manner of the thrashing, is apt reward for Wang’s breakthrough run at the tournament.

Serena next faces Elina Svitolina, who in some ways is an advanced version of Wang. Svitolina also loves to be steady from the baseline and stick to a simple gameplan, but unlike the Chinese she has plenty of offensive firepower too. Will that motivate Serena to raise her level even further?

“Svitolina is obviously a fighter,” Serena said when asked to comment on the upcoming semi-final. “She doesn’t make a lot of mistakes. She’s one of those players that does everything really well. So I have to do everything well, too.”

If the quarter-final against Wang is any indication, then Serena already has some pretty good practice of doing ‘everything well’.