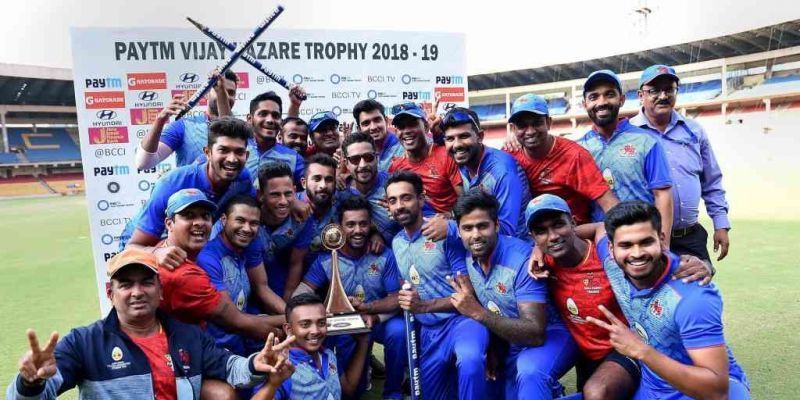 On a day of low-scoring ties, Madhya Pradesh and Bengal raced to victories without much hassle while Gujarat were tested later in the day at the Vijay Hazare Trophy 2019.

Here are the complete results of the matches played on 30th September 2019.

Bengal defeated Jammu & Kashmir by eight wickets at the Jaipuria Vidyalaya Ground in Jaipur. Opting to bat first, Jammu & Kashmir found themselves in trouble with five of the top six batsman getting sent back to the dugout in single-digit scores, which also included three ducks. Fazil Rashid and Ram Dayal steadied the J&K innings with Dayal getting a well deserved half-century in the process.

Part of the Board President’s XI that played against South Africa, Bengal paceman Ishan Porel took six wickets for 24 runs in his quota of 10 overs while former Indian fastbowler Ashok Dindatook two wickets. Bengal openers started strongly and made the tie into a single-sided affair as both Shreevats Goswami and Abhimanyu Easwaran scored half-centuries. Former Bengal captain Manoj Tiwary remained 27 not out while Easwaran finished on an unbeaten 86 off 80 deliveries.

In another low scoring tie, Madhya Pradesh defeated Bihar by seven wickets at the KL Saini Ground at Jaipur. Put into bat first, Bihar were skittled out for 137 runs thanks to a wicket taking spell from leg-spinner Mihir Hirwani who took four for 29 runs.

Mihir was well assisted by Gaurav Yadav, who claimed a three-for, continuing his good form from the game against Railways where he took five wickets. In reply, captain Rajat Patidar rallied the team with the top score of 48 runs in as many balls. Opener Mukul Raghav scored a well made 46 off 48 balls to form a match winning partnership with Patidar.

A century by Bhargav Merai helped Gujarat register a convincing win against Tripura after they were put into bat at the Sawai Mansingh Stadium at Jaipur. Gujarat got off to a terrible start as they lost their captain Parthiv Patel for a duck. Priyank Panchal and Kathan Patel followed soon.

But a strong middle-order presence ensured Gujarat cross the 300-run mark. Axar Patel made a quick-fire 45 off 25 deliveries while Manpreet Juneja scored a patient half-century. Tripura had an interesting scorecard at the end of the game registering only two double-digit scores. Tanmay Mishra played a valiant 62-run knock while Milind Kumar scored an unbeaten ton to no avail as Gujarat raced to a easy 101-run victory.